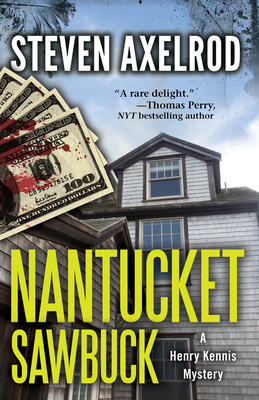 This is book number 1 in the Henry Kennis Nantucket Mysteries series.

When Nantucket homeowner Preston Lomax is killed, everyone on the island could be a suspect. Lomax lived large, owed money, and the word was spreading he was planning to stiff them all and disappear. Chief of Police Henry Kennis, a newcomer from California, investigates with help from the State Police. Together they solve the case—or so it appears. But Kennis can't shake the feeling that they've missed something.

"Nantucket Sawbuck is a rare delight—a well-written small-town mystery that feels like life, complete with suspects who are the sort of people who commit murders and a police chief who’s capable of catching them at it. Read this book." — Thomas Perry

"Kennis is an honorable small-town cop whom readers will root for." — Karen Keefe, Booklist

"...this is a promising start for a new author." — Publishers Weekly

"Axelrod has a gift for characterization and a strong lead in Kennis. Nantucketers might bristle at the cynical portrait of their home, but his mystery debut gives the island as much personality as its varied inhabitants." — Kirkus Reviews