Ben Y and the Ghost in the Machine: The Kids Under the Stairs (Hardcover) 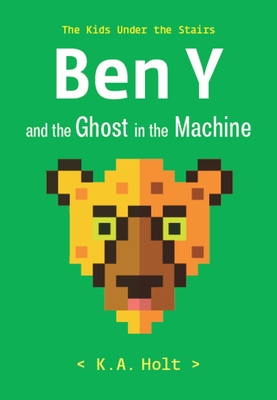 This second book in a new series by K.A. Holt will appeal to fans of House Arrest, Rhyme Schemer, and Knockout, in addition to fans of Jason Reynolds's Track series.

Ben Y's just about had it with school. Every corner she turns, she's being called "Benita," getting Dress Coded by Mr. Mann for some supposedly inappropriate item of clothing, or running into the ineffable, inescapable, indefinable Ace—who makes her feel weird, weirdly seen, and strangely at peace, all at once. Even her best buds—Ben B, Jordan J, and Javier; the kids under the stairs—are all far too content following the rules and making their school newspaper under the attentive direction of their beloved teacher, Ms. J.

And home's no better. Last year, Ben Y's older brother died, and the family is still learning how to cope—if by coping you mean coming home to cry at lunch, or secretly building a friendship bracelet empire, or obsessively visiting a chatroom to talk to Benicio's ghost. When Benito suddenly starts typing back, Ben Y must act. But what happens when those very actions make Ben Y's deepest secrets impossible to hide?

Readers will easily identify with the variety of funny, authentic lovable characters—not to mention the emphasis on a Minecraft-like game and fun visuals like online chats and doodles. Parents, kids, educators and librarians alike will love the way the book celebrates all the different ways to be smart—and recognizes all the different ways it's hard to be a kid.

With a lovable cast of characters and raw, authentic emotion, this heartwarming, laugh-out-loud novel-in-verse tells an honest story about friendship, family, and personal identity that celebrates different types of intelligence and shows how every kid deserves to become their own "divergent" self.

NEW UNDERSTANDING OF IDENTITY: The main character in this book is struggling to figure out how she defines herself, both on the inside and to others. It's a struggle many young readers will recognize from their own experiences.

FRIENDSHIP ISSUES: This book navigates the difficulty of changing friendships, particularly when a new friend joins the group. It's an issue nearly every kid goes through in middle school, and will ring authentic to all young readers.

POPULAR AUTHOR: K.A. Holt's books have been nominated for awards in over 30 states. She is popular on the school speaking circuit and presents keynote speeches throughout the year and all over the world, making her a trusted name and a favorite for middle grade readers.

PERFECT FOR RELUCTANT READERS: Fewer words on each page make this book engaging and approachable for all different types of readers. The characters in the book also struggle with reading, but they are not shamed or looked down on for it, so readers with similar difficulties will feel understood.

NEWSPAPER THEME: The kids in this story work on their school newspaper, turning their tech skills into something their teachers approve of—and something that allows them to stand up for what they believe in.

MINECRAFT APPEAL: The characters in the book play Sandbox, which readers will instantly recognize as a fictionalized version of the immensely popular Minecraft, a game with over 74 million monthly players. Playing Sandbox is depicted as both cool and educational, which will uplift rather than shame young readers for playing video games, and inspire parents, teachers, and librarians to consider non-traditional approaches to traditional school.

K.A. Holt is the author of Rhyme Schemer, House Arrest, Knockout, and Redwood and Ponytail, along with several other books for young people. She lives in Austin, Texas, and is active within the vibrant Texas writing community.

“Holt’s sequel digs into Ben Y’s journey grappling with grief and identity. The novel hits the important points of understanding and verbalizing what one is feeling. . . . An excellent addition to ‘The Kids Under the Stairs’ series and one that kids and adults alike will supremely enjoy.”-School Library Journal, starred review

“[A]ppealing to readers who might resist a page full of prose. . . [K.A. Holt’s] stories are sophisticated and character-driven.”-The Austin American-Statesman

“An emotionally charged, dynamic novel in verse. This focused character study delivers layered attention to grief and self-exploration. Multiple formats, including chat messages in the Minecraft-like Sandbox, combined with extraordinary pacing make this a win for reluctant readers, while the humor and emotional reach will draw in anyone interested in middle-grade emotional realism. With minimal physical descriptions, names cue ethnic diversity. Accomplished, lively, and heartfelt.”—Kirkus Reviews