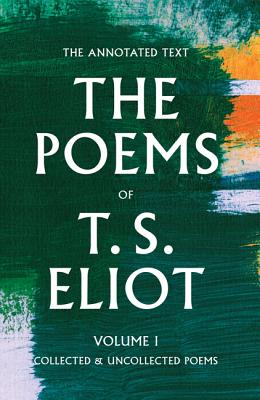 A monumental event in Eliot scholarship.

Winner of the CHOICE Outstanding Academic Title of the Choice ACRL, Pegasus Award for Criticism of the Poetry Magazine

This critical edition of T. S. Eliot's Poems establishes a new text of the Collected Poems 1909-1962, rectifying accidental omissions and errors that have crept in during the century since Eliot's astonishing debut, "The Love Song of J. Alfred Prufrock." As well as the masterpieces, the edition contains the poems of Eliot's youth, which were rediscovered only decades later, others that circulated privately during his lifetime, and love poems from his final years, written for his wife Valerie Eliot.

Christopher Ricks and Jim McCue have provided a commentary that illuminates the imaginative life of each poem. Calling upon Eliot's critical writings, as well as his drafts, letters, and other original materials, they illustrate not only the breadth of Eliot's interests and the range of his writings, but how it was that the author of "Gerontion" came to write "Triumphal March" and then Four Quartets. Thanks to the family and friends who recognized Eliot's genius and preserved his writings from an early age, the archival record is exceptionally complete, enabling us to follow in unique detail the progress of a mind that never ceased exploring.

This first volume respects Eliot's decisions by opening with his Collected Poems 1909-1962 as he arranged and issued it, shortly before his death fifty years ago. This is followed by poems uncollected but either written for or suitable for publication, and by a new reading text of the drafts of The Waste Land. The volume concludes with the commentary on all of these poems.

The second volume opens with the two books of verse of other kinds that Eliot issued, Old Possum's Book of Practical Cats and his translation of St.-John Perse's Anabase. Different again are the verses informal, improper, or clubmanlike. Each of these sections has its own commentary. Finally, pertaining to the entire edition, there is a textual history that contains not only variants from all known drafts and the many printings but also extended passages amounting to hundreds of lines of compelling verse.

"The more we know of Eliot, the better."--Ezra Pound

Thomas Stearns Eliot was born in St. Louis, Missouri, in 1888. He moved to England in 1914 and published his first book of poems in 1917. He received the Nobel Prize in Literature in 1948. Eliot died in 1965. Christopher Ricks is the co-director, with Archie Burnett, of the Editorial Institute at Boston University. His publications on Eliot include T. S. Eliot and Prejudice (1988), Inventions of the March Hare: Poems 1909-1917 (1996), and Decisions and Revisions in T. S. Eliot (the Panizzi Lectures, 2002), together with True Friendship: Geoffrey Hill, Anthony Hecht, and Robert Lowell under the Sign of Eliot and Pound (2007). Jim McCue is the author of Edmund Burke and Our Present Discontents (1997) and the editor of the Penguin Selected Poems of Arthur Hugh Clough (1991). For fifteen years he worked for The Times, where he wrote the Bibliomane column. His imprint, the Foundling Press, began with the first separate publication of T. S. Eliot's Eeldrop and Appleplex and has printed for the first time writings by Alexander Pope, Ben Jonson, Henry James, and A. E. Housman.