Reverberation: Do Everything Better with Music (Hardcover) 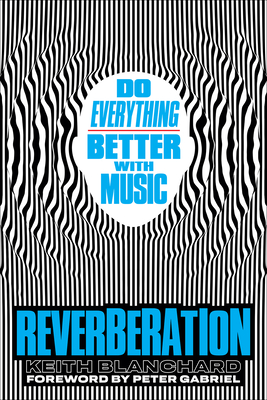 Music is a universal human experience that’s been with us since the dawn of time. You’ve listened to music all your life . . . but have you ever wondered why?

It turns out music isn’t just about entertainment—it’s a deeply embedded, subtly powerful means of communication. Songs resonate with your brain wave patterns and drive changes in your brain: creating your moods, consolidating your memories, strengthening your habits (the good ones and the bad ones alike) . . . even making you fall in or out of love.

Your music is molding you, at a subconscious level, all day long. And now, for the first time ever, you can take charge.

From executive editor Peter Gabriel and the minds behind It’s All in Your Head (the ultimate user’s guide for your brain), Reverberation unlocks a world where you can actively leverage the power of music to improve and enhance every aspect of your life. You’ll learn specific songs and techniques to help you sleep better, induce creative breakthroughs, be more productive, have better sex, and a whole lot more.

And you’ll learn how music is already being strategically applied to break addiction and reverse the effects of Alzheimer’s, build more productive and creative teams, develop intuitive personalized technology, and is otherwise changing . . . well, everything.

Keith Blanchard has contributed in various capacities to a wide range of publishing and production enterprises, including Cosmopolitan, Rolling Stone, and the Wall Street Journal, among others. Most recently he was the chief digital officer of World Science Festival. He lives in New York.

Peter Gabriel first rose to fame as the lead singer of the innovative progressive rock band Genesis. After leaving Genesis in 1975, Gabriel launched a successful solo career with the hit single “Solsbury Hill.” Gabriel has championed a series of humanitarian projects and participated in numerous benefit concerts for different causes, both on and off stage. To date, Gabriel has won six Grammy Awards and 13 MTV Video Music Awards. He has twice been inducted into the Rock & Roll Hall of Fame, first as a member of Genesis, and again as a solo artist. In recognition of his many years of human rights activism, he received the Man of Peace award from the Nobel Peace Prize laureates, and TIME magazine named him one of the 100 most influential people in the world. He lives in Wiltshire, England.