Slave Nation: How Slavery United the Colonies and Sparked the American Revolution (Paperback) 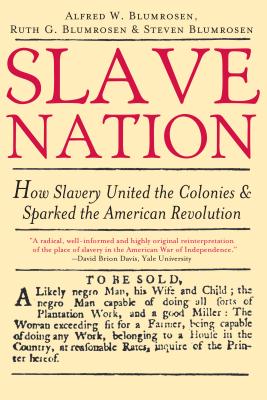 By Alfred Blumrosen, Ruth Blumrosen
$17.99
On Our Shelves Now

"A radical, well-informed, and highly original reinterpretation of the place of slavery in the American War of Independence."-David Brion Davis, Yale University
In 1772, the High Court in London brought about the conditions that would end slavery in England by freeing a black slave from Virginia named Somerset. This decision began a key facet of independence.
Slave Nation is a fascinating account of the role slavery played in the drawing of the United States Constitution and in shaping the United States. At the Constitutional Convention, the South feared that the Northern states would leave the Convention over the issue of slavery. In a compromise, the Southern states agreed to slavery's prohibition north of the Ohio River, resulting in the Northwest Ordinance. This early national division would continue to escalate, eventually only reaching resolution through the Civil War.

Alfred W. Blumrosen is the Thomas A. Cowan Professor of Law at Rutgers University in New Jersey, specializing in labor and employment law, and has a long history in enforcement of civil rights. The late Ruth Gerber Blumrosen was an adjunct professor of law at Rutgers Law School and also worked in civil rights compliance.