The Colossus of New York (Paperback) 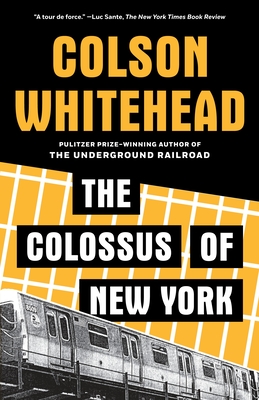 In a dazzlingly original work of nonfiction, the two time Pulitzer-Prize winning author of The Underground Railroad and The Nickel Boys recreates the exuberance, the chaos, the promise, and the heartbreak of New York.

Here is a literary love song that will entrance anyone who has lived in—or spent time—in the greatest of American cities.

A masterful evocation of the city that never sleeps, The Colossus of New York captures the city’s inner and outer landscapes in a series of vignettes, meditations, and personal memories. Colson Whitehead conveys with almost uncanny immediacy the feelings and thoughts of longtime residents and of newcomers who dream of making it their home; of those who have conquered its challenges; and of those who struggle against its cruelties.

Whitehead’s style is as multilayered and multifarious as New York itself: Switching from third person, to first person, to second person, he weaves individual voices into a jazzy musical composition that perfectly reflects the way we experience the city. There is a funny, knowing riff on what it feels like to arrive in New York for the first time; a lyrical meditation on how the city is transformed by an unexpected rain shower; and a wry look at the ferocious battle that is commuting. The plaintive notes of the lonely and dispossessed resound in one passage, while another captures those magical moments when the city seems to be talking directly to you, inviting you to become one with its rhythms.

The Colossus of New York is a remarkable portrait of life in the big city. Ambitious in scope, gemlike in its details, it is at once an unparalleled tribute to New York and the ideal introduction to one of the most exciting writers working today.

Colson Whitehead is the Pulitzer-Prize winning author of The Underground Railroad. His other works include The Noble Hustle, Zone One, Sag Harbor, The Intuitionist, John Henry Days, Apex Hides the Hurt, and one collection of essays, The Colossus of New York. A National Book Award winner and a recipient of MacArthur and Guggenheim fellowships, he lives in New York City.

“Pitch-perfect. . . . Utterly authentic. . . . The Colossus of New York is quite simply the most delicious 13 bites of the Big Apple I’ve taken in ages.” --Grace Lichenstein, The Washington Post

“The cheapest, most stylish ticket to the Big Apple between two covers. . . . .It’s as if Whitehead’s scooped his pen into the collective unconscious of everyone who’s ever visited New York.” —Pittsburg Post-Gazette

“A revelatory ode to Gotham. . . . Whitehead’s engaged eyes and precise prose show us the small details we overlook and the large ones we fail to absorb.” —The Miami Herald

“[Whitehead is] a scientist of metropolitan encounters, he surveys places where the masses collide, knitting together hundreds of observations and calculations that usually remain unspoken. . . . The musical prose thrums with urban momentum.” —The Village Voice

“[Whitehead’ s] New York, like Walt Whitman’s or Thomas Pynchon’s or Woody Allen’s, is full of incantatory potential. Even the subway, ordinary, noisy, gruddy inevitability, becomes a ferry to the Underworld.” —The Atlanta Journal-Constitution

“[A] rhapsodic ode to Gotham.” —Time Out

“Jazzlike. . . . A vivid impressionistic montage of Manhattan.” —The Seattle Times

“Whitehead’s series of vignettes and remembrances paint a perfect visual landscape. . . . A heartfelt tribute to Whitehead’s home.” —The Oregonian

“Lyrical. . . . Lean and full of longing. . . . The kind of book that will be . . . passed around, dog-eared, library-tagged, resold, from reader to reader. . . . Whitehead takes a known and specific place and universalizes it, insinuating it into the meshwork of our thoughts in a manner impervious to time and trend.” —Minneapolis Star Tribune

“Thrums with anxious excitement and excited anxiety accommodating the noirish, the reportorial, and the epigrammatic. . . . The best passages deserve comparison with E.B. White’s Here is New York.” —Entertainment Weekly

“Whitehead [is] one of the city’s and country’s finest young writers. . . . [A] guided tour de force.” —Chicago Tribune

“Jazzlike. . . . A vivid impressionistic montage of Manhattan.” —The Seattle Times

“A revelatory ode to Gotham. . . . Whitehead’s engaged eyes and precise prose show us the small details we overlook and the large ones we fail to absorb.” —Miami Herald

“Whitehead’ s series of vignettes and remembrances paint a perfect visual landscape. . . . A heartfelt tribute to Whitehead’s home.” —The Oregonian