Natural Disaster: I Cover Them. I am One. (Paperback) 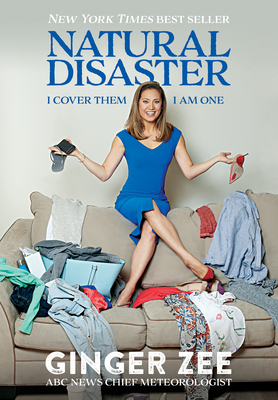 ABC News chief meteorologist Ginger Zee pulls back the curtain on her life in Natural Disaster. Ginger grew up in small-town Michigan where she developed an obsession with weather as a young girl. Ginger opens up about her lifelong battle with crippling depression, her romances that range from misguided to dangerous, and her tumultuous professional path. This cyclone of stories may sound familiar to some—it's just that Ginger’s personal tempests happened while she was covering some of the most devastating storms in recent history, including a ferocious tornado that killed a legend in the meteorology field. This book is for all the mistake makers who have learned to forgive others and themselves—even in the aftermath of man-made, or in this case Zee-made, disasters. It's a story that every young woman should read, a story about finding love and finding it in yourself.Beloved by Good Morning America’s audience, Ginger is a daily presence for millions. Zee’s gained fame for her social media presence which is as unfiltered as Natural Disaster—from baby barf to doggy doo-doo. She’s shattered the glass ceiling for women in meteorology, but admits here first, she's the one natural disaster she couldn't have forecast.

Ginger Zee is the Chief Meteorologist for ABC News, forecasting for and reporting on the nation's weather from Good Morning America to World News Tonight. Zee has been on the ground before, during and after almost every major weather event and dozens of historic storms including Hurricane Katrina. She watched as the eye of Superstorm Sandy passed over Atlantic City and then covered the devastated Jersey Shore; she was there for the Colorado floods and wildfires; and the destructive tornadoes in Moore and El Reno, Oklahoma. Zee’s dedication to science began at an early age, watching powerful thunderstorms rush across Lake Michigan. Her passion for meteorology brought her to stormchase in college at Valparaiso University where she earned her bachelor of science in meteorology. Throughout her career and especially in this book, Zee is dedicated to getting young people interested in science, respecting the environment and atmosphere around them.

Readers may recognize Zee from Good Morning America or Dancing with the Stars. She first fell in love with weather while watching storms over Lake Michigan, later deciding to be a meteorologist and pursuing her goal with intense drive. Though much of her memoir has a light tone, Zee also discusses her struggles with mental health and an abusive relationship. With writing that’s approachable and reader-focused, occasionally dipping into meta commentary, Zee gives readers a behind-the-scenes tour of life as a network meteorologist. Natural Disaster chronicles Zee’s hard work in all areas of her life and her ability to find the eye of any storm.—Booklist