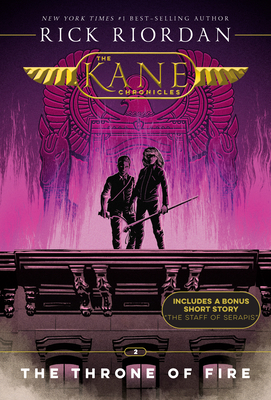 This is book number 2 in the The Kane Chronicles series.

In Book 2 of the Kane Chronicles, now in paperback, Carter and Sadie Kane face growing opposition from the House of Life, and the stage is set for the final battle, to take place in Book 3.
“Fans of the Riordan magic--equal parts danger, myth, and irreverence--will embrace this new series with open arms.”—The Horn BookEver since the gods of ancient Egypt were unleashed in the modern world, Carter Kane and his sister, Sadie, have been in trouble.
As descendants of the House of Life, the Kanes have some powers at their command; but the devious gods haven't given them time to master their skills at Brooklyn House, a training ground for young magicians.
And now their most threatening enemy yet--the Chaos snake, Apophis--is rising. If they don't prevent him from breaking free in a few days' time, the world will end. In other words, it's a typical week for the Kane family.
To have any chance of battling the forces of Chaos, the Kanes must revive the sun god, Ra. But that would be a feat more difficult than any magician has ever accomplished. First they have to search the world for the Book of Ra, then they have to learn how to chant its spells. Oh, and did we mention that no one knows where Ra is, exactly?
Narrated by two different wisecracking voices, featuring a large cast of new and unforgettable characters, and with adventures spanning the globe, this second installment of the Kane Chronicles is nothing short of a thrill ride.

Rick Riordan, dubbed "storyteller of the gods" by Publishers Weekly, is the author of five #1 New York Times best-selling middle grade series with millions of copies sold throughout the world: Percy Jackson and the Olympians, The Heroes of Olympus, and the Trials of Apollo, based on Greek and Roman mythology; the Kane Chronicles, based on Ancient Egyptian mythology; and Magnus Chase and the Gods of Asgard, based on Norse mythology. Rick collaborated with illustrator John Rocco on two #1 New York Times best-selling collections of Greek myths for the whole family: Percy Jackson's Greek Gods and Percy Jackson's Greek Heroes. Rick is also the publisher of an imprint at Disney-Hyperion, Rick Riordan Presents, dedicated to finding other authors of highly entertaining fiction based on world cultures and mythologies. He lives in Boston, Massachusetts with his wife and two sons. Follow him on Twitter at @RickRiordan.