Fantastic Beasts and Where to Find Them: The Illustrated Collector's Edition (Hardcover) 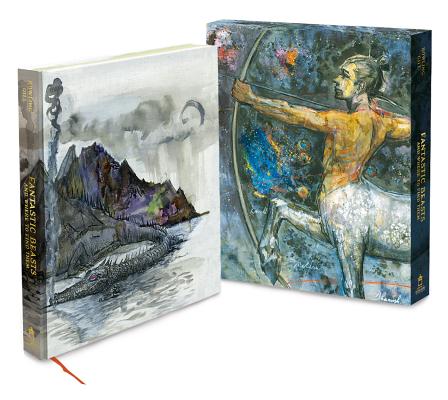 An essential companion to the Harry Potter novels, now fully illustrated in a lavishly produced collector's edition! In addition to the hardcover illustrated edition of Fantastic Beasts and Where to Find Them, Newt Scamander's classic compendium of magical creatures, we are proud to present a deluxe collector's edition. Special features include:*Over-sized cloth-bound hardcover in slipcase*Gold foil stamped artwork on book cover and slipcase*Gilt edges on premium grade paper*Double gatefold spread*Two silk ribbon bookmarks*Exclusive pull-out poster in a gatefold envelope*Packed in bespoke individual mailing cartonsA rare opportunity and a luxurious reading experience, this deluxe collector's edition is the ultimate gift for Harry Potter fans and bibliophiles alike. Proceeds from the sale of this book will go to Comic Relief and J.K. Rowling's international charity, Lumos, which will do magic beyond the powers of any wizard.

J.K. Rowling is the author of the seven Harry Potter books, which have sold over 500 million copies, been translated into over 80 languages, and made into eight blockbuster films. She also wrote three short series companion volumes for charity, including Fantastic Beasts and Where to Find Them, which later became the inspiration for a new series of films. Harry’s story as a grown-up was later continued in a stage play, Harry Potter and the Cursed Child, which J.K. Rowling wrote with playwright Jack Thorne and director John Tiffany.

In 2020, she returned to publishing for younger children with the fairy tale The Ickabog, which she initially published for free online for children in lockdown, later donating all her book royalties to help vulnerable groups affected by the Covid-19 pandemic.

J.K. Rowling has received many awards and honors for her writing, including for her detective series written under the name Robert Galbraith. She supports a wide number of humanitarian causes through her charitable trust Volant, and is the founder of the children’s care reform charity Lumos.

For as long as she can remember, J.K. Rowling wanted to be a writer, and is at her happiest in a room, making things up. She lives in Scotland with her family.