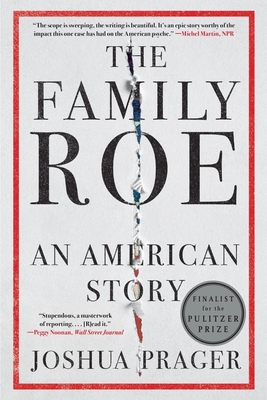 Finalist for the 2022 Pulitzer Prize for General Nonfiction

Finalist for the National Book Critics Circle Award for Nonfiction

"The scope is sweeping, the writing is beautiful. It’s an epic story worthy of the impact this one case has had on the American psyche." ? Michel Martin, NPR

"Stupendous…. If you want to understand Roe more deeply before the coming decision, read it." ? Peggy Noonan, Wall Street Journal

A masterpiece of reporting on the Supreme Court’s most divisive case, Roe v. Wade, and the unknown lives at its heart.

Despite her famous pseudonym, “Jane Roe,” no one knows the truth about Norma McCorvey (1947–2017), whose unwanted pregnancy in 1969 opened a great fracture in American life. Journalist Joshua Prager spent hundreds of hours with Norma, discovered her personal papers—a previously unseen trove—and witnessed her final moments. The Family Roe presents her life in full. Propelled by the crosscurrents of sex and religion, gender and class, it is a life that tells the story of abortion in America.

Prager begins that story on the banks of Louisiana’s Atchafalaya River where Norma was born, and where unplanned pregnancies upended generations of her forebears. A pregnancy then upended Norma’s life too, and the Dallas waitress became Jane Roe.

Drawing on a decade of research, Prager reveals the woman behind the pseudonym, writing in novelistic detail of her unknown life from her time as a sex worker in Dallas, to her private thoughts on family and abortion, to her dealings with feminist and Christian leaders, to the three daughters she placed for adoption.

Prager found those women, including the youngest—Baby Roe—now fifty years old. She shares her story in The Family Roe for the first time, from her tortured interactions with her birth mother, to her emotional first meeting with her sisters, to the burden that was uniquely hers from conception.

The Family Roe abounds in such revelations—not only about Norma and her children but about the broader “family” connected to the case. Prager tells the stories of activists and bystanders alike whose lives intertwined with Roe. In particular, he introduces three figures as important as they are unknown: feminist lawyer Linda Coffee, who filed the original Texas lawsuit yet now lives in obscurity; Curtis Boyd, a former fundamentalist Christian, today a leading provider of third-trimester abortions; and Mildred Jefferson, the first black female Harvard Medical School graduate, who became a pro-life leader with great secrets.

An epic work spanning fifty years of American history, The Family Roe will change the way you think about our enduring American divide: the right to choose or the right to life.

Joshua Prager has written for the Atlantic, Vanity Fair, New York Times, and Wall Street Journal. A former Harvard Nieman Fellow, he is the author of The Echoing Green (a Washington Post Best Book of the Year) and lives in New Jersey.

The scope is sweeping, the writing is beautiful. It’s an epic story worthy of the impact this one case has had on the American psyche.
— Michel Martin - NPR

Mr. Prager’s book is stupendous, a masterwork of reporting…. If you want to understand Roe more deeply before the coming decision, read it.
— Peggy Noonan - Wall Street Journal

The Family Roe is a work of deep empathy without sentimentality, a recovery of fact over myth, a quintessentially American story.

Joshua Prager has humanized the story of how abortion came to be legalized in the United States— and how it came to shape the American culture wars…. The book reads like detective fiction.
— Andrew Solomon, National Book Award–winning author of Far From the Tree

Journalist Joshua Prager offers a masterclass in reporting in his book The Family Roe, which weaves concentric rings of activists and Christian fundamentalists, lawyers and Harvard Medical School graduates—groups called to action in the fiery debates over the case—to reveal a rich tapestry of American life and values in the 20th-century.

Prager’s book does more than educate the reader on legal history; it shows how one changes over a lifetime. It is a study of the human experience…. Prager reminds the reader that stances on abortion can be as fluid and complex as the generations-long battle over it. He offers no hint of his own political standing and ultimately leaves his complete history of Roe open to every reader.
— Los Angeles Review of Books

Deeply reported and beautifully written…. Prager powerfully refutes the idea that women should have to win a morality contest in order to “deserve” access to abortion.
— Lauren Gutterman - Slate

Prager’s book is not just a biography but also political history…. Prager excels in revealing the messy, complicated people at the heart of America’s abortion fight; their motives, he seems to say, are much more tangled than any of them would likely admit…. The Family Roe is a fascinating portrait of a woman whose life was shaped by the abortion debate.

The Family Roe: An American Story is a masterpiece of journalistic research…. Prager challenges readers’ presuppositions and refuses to fit the book’s messy stories into clear moral categories. Things (and people) are not always what they seem. Nearly all the people profiled in this book carry deep secrets that they refuse to reveal to others—but that Prager, as a master journalist, repeatedly succeeds in uncovering.

The Family Roe is the definitive historical account of Roe v Wade and the human stories behind the headlines. Joshua Prager tells these stories with respect and backs his writing with stunning research. I write this as one who seeks to defend the unborn and end the abortion industry in America. But everyone who cares about abortion in America—on both sides—must read this book and then get back to the argument. The Family Roe is a remarkable achievement.

The Family Roe is an eminently valuable read.

With a novelist’s grace, Prager shows how the narratives we use to justify our personal decisions and our politics too often fail to make room for our own and others’ unresolved ambivalence, messy realities, and human frailty.
— Lara Freidenfelds - Nursing Clio