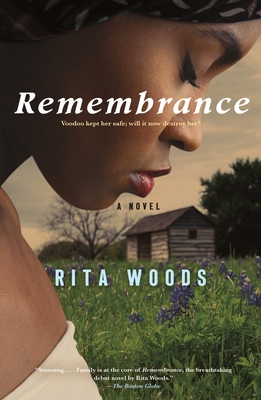 Remembrance by Rita Woods is a breakout historical debut with modern resonance, perfect for the many fans of The Underground Railroad and Orphan Train.

Remembrance…It’s a rumor, a whisper passed in the fields and veiled behind sheets of laundry. A hidden stop on the underground road to freedom, a safe haven protected by more than secrecy…if you can make it there.

Ohio, present day. An elderly woman who is more than she seems warns against rising racism as a young woman grapples with her life.

Haiti, 1791, on the brink of revolution. When the slave Abigail is forced from her children to take her mistress to safety, she discovers New Orleans has its own powers.

1857 New Orleans—a city of unrest: Following tragedy, house girl Margot is sold just before her 18th birthday and her promised freedom. Desperate, she escapes and chases a whisper.... Remembrance.

RITA WOODS is a family doctor and the director of a wellness center. When she's not busy working or writing Dr. Woods spends time with her family or at the Homer Glen library where she served on the board for ten years. Remembrance is her first novel.

"Stunning. ... Family is at the core of Remembrance, the breathtaking debut novel by Rita Woods." --The Boston Globe

"An ambitious, absorbing novel. ... Woods creates memorable characters in all four settings, each with a distinct purpose that helps make the impossible relatable. Remembrance is a well-researched, epic historical fantasy." -- NPR

"Woods’ writing is assured, the historical settings vivid, and her characters fully realized. Hand this to fans of Yaa Gyasi’s Homegoing and Octavia Butler's Kindred, who will appreciate this complex, genre-blending debut." --Booklist

"Fine attention to sensory details and brutal honesty concerning the horrors of slavery and racial relations over more than two centuries of American history make this a standout." --Publishers Weekly

"The novel's originality makes it worth reading." --Kirkus Reviews