Mistborn Boxed Set I: Mistborn, The Well of Ascension, The Hero of Ages (The Mistborn Saga) (Multiple copy pack) 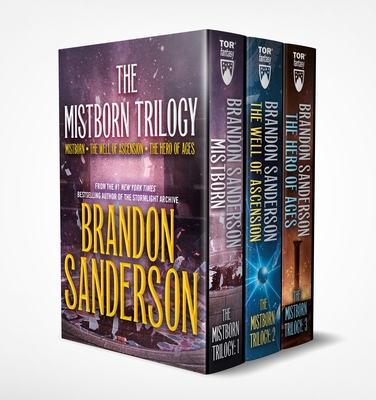 The Well of Ascension:
The impossible task has been accomplished. The Lord Ruler has been vanquished. But with Kelsier dead, too, the awesome task of building a new world has been left to former street urchin and Kelsier's protégé Vin, who is now the most powerful Mistborn in the land. Vin is now worshipped as a hero in her own right, but she is haunted by a strange vaporous entity hidden in the mists.

The Hero of Ages:
Having escaped death only by becoming a Mistborn himself, Emperor Elend Venture now hopes to find clues left behind by the Lord Ruler that will allow him to save the world. But with the return of lethal mists, increasingly heavy ashfalls, and ever more powerful earthquakes, Elend and Vin aren't sure that killing the Lord Ruler to end the Final Empire was the right thing to do after all.

Brandon Sanderson grew up in Lincoln, Nebraska. He lives in Utah with his wife and children and teaches creative writing at Brigham Young University. He is the author of such bestsellers as the Mistborn® trilogy and its sequels, The Alloy of Law, Shadows of Self, and The Bands of Mourning; the Stormlight Archive novels The Way of Kings and Words of Radiance; and other novels, including The Rithmatist, Steelheart, and Skyward. In 2013, he won a Hugo Award for Best Novella for The Emperor's Soul, set in the world of his acclaimed first novel, Elantris. Additionally, he was chosen to complete Robert Jordan's Wheel of Time® sequence.