My Life as a Cartoonist (The My Life series #3) (Paperback) 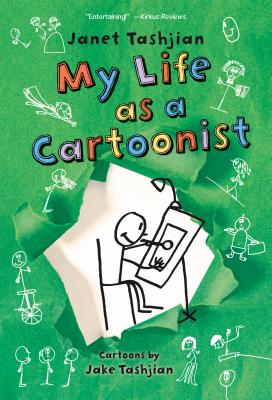 This is book number 3 in the The My Life series series.

In Book Three of the popular "My Life . . ." series by Janet Tashjian, Derek Fallon's plan to help out a new classmate backfires miserably

There's a new kid in Derek Fallon's class. His name is Umberto and he uses a wheelchair. Derek's family is still fostering Frank the monkey, and Derek thinks it would be great to train Frank to assist Umberto. But Derek quickly realizes that Umberto is definitely not looking for any help. Derek soon becomes the butt of Umberto's jokes. On top of that, Umberto starts stealing Derek's cartoon ideas and claiming them as his own. How did Derek get himself into this mess, and how can he find a way out before he is the laughingstock of school? The answer may very well be his cartoon strip—SUPER FRANK!

My Life as a Cartoonist features illustrations by Janet Tashjian's son, Jake Tashjian.

Janet Tashjian is a middle-grade and young adult novelist who’s been writing books for children for over two decades. Her first novel Tru Confessions was made into a critically acclaimed Disney TV movie starring Clara Bryant and Shia LaBeouf. The Gospel According to Larry series is a cult favorite and Fault Line is taught in many middle and high schools. Her bestselling My Life As a Book series is illustrated by her son, Jake. They also collaborated on the Einstein the Class Hamster series.

Janet collaborated with fellow Macmillan author Laurie Keller on the chapter book series Marty Frye, Private Eye. Janet currently lives in Los Angeles and made her new home city the setting of the Sticker Girl series, which details the adventures of Martina who overcomes being shy with the help of her magical stickers that come to life.

Jake Tashjian is the illustrator for the My Life As a...series, including My Life As a Ninja and My Life As a YouTuber. Jake also created and illustrated the Einstein the Class Hamster series. He collaborates on his novels with his mother, author Janet Tashjian. He has also illustrated several books for the author P.T. Evans.

Fun fact: Jake is a visual learner. When Jake was in elementary school, he used to draw his vocabulary words on index cards. This later became the inspiration for the main character, Derek, in the My Life As series.

In 2016 Jake co-founded Workshop 2.0, a non-profit foundation to train and hire other young artists on the Autism Spectrum.

Jake grew up in Massachusetts and currently lives in Los Angeles. He is an avid surfer and filmmaker.

“Cartoonist Derek grapples with a perplexing association between disability and bullying in this stand-alone sequel to My Life as a Book (2010) and My Life as a Stuntboy (2011).” —Kirkus Reviews

“Give this to kids who think they don't like reading. It might change their minds.” —Booklist, starred review on My Life as a Book

“A kinder, gentler Wimpy Kid with all the fun and more plot.” —Kirkus Reviews, starred review on My Life as a Book

“Sure to engage fans of Jeff Kinney's ‘Diary of a Wimpy Kid' books as well as those looking for a spunky, contemporary boy with a mystery to solve.” —School Library Journal on My Life as a Book

“Another fun, emotionally resonant read for the Wimpy Kid set and beyond.” —Kirkus Reviews on My Life as a Stuntboy

“A fast-moving plot and relatable protagonist make this stand-alone sequel a good choice for boys who, like Derek, would rather reach for a TV remote or game controller than a book.” —School Library Journal on My Life as a Stuntboy

“Fans of the first will be utterly delighted by this sequel and anxious to see what [Derek] will turn up as next.” —BCCB on My Life as a Stuntboy

“This is a great package for kids, especially those like Derek who don't think they like to read.” —Booklist on My Life as a Stuntboy