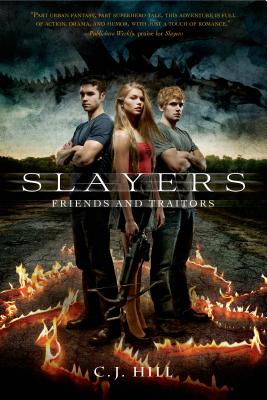 By C. J. Hill
Email or call for price
Out of Print

This is book number 2 in the Slayers series.

In C.J. Hill's action-packed sequel to Slayers, the group of teens known as Slayers have been betrayed—but they won't give up without a fight.

Tori's got a problem. She thought she'd have one more summer to train as a dragon Slayer, but time has run out. When Tori hears the horrifying sound of dragon eggs hatching, she knows the Slayers are in trouble. In less than a year, the dragons will be fully grown and completely lethal. The Slayers are well-prepared, but their group is still not complete, and Tori is determined to track down Ryker—the mysterious missing Slayer.

What Tori doesn't bargain for, however, is the surprising truth about her powers. She isn't just a Slayer, she's part Dragon Lord, too. How can Tori fight to save her friends when half of her is programmed to protect dragons? And with a possible traitor in their midst, the Slayers will be divided in more ways than they ever imagined.

C.J. Hill is the pseudonym for a popular young adult author who made her fantasy debut with Slayers.

“The mix of fantasy, dragons, superpowers, and romantic drama will have wide appeal to many readers.” —School Library Journal

“Part urban fantasy, part superhero tale, this adventure is full of action, drama, and humor, with just a touch of romance.” —Publishers Weekly Online on Slayers

“This promising new series may feature dragons and a reeducation camp for contemporary youths who have mythological roots, but the character development, plotting, and ethical quandaries make this more than a worthy equal of the works of Rick Riordan or Christopher Paolini.” —Booklist on Slayers