Into a Raging Sea: My Life and the Pendleton Rescue (Paperback) 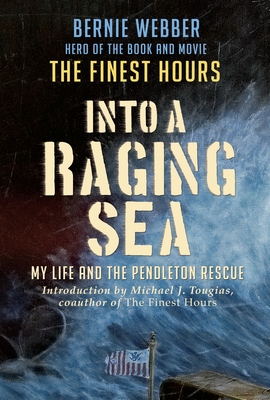 By Bernie Webber, Michael Tougias (Introduction by)
$15.95
Email or call for price.

Most people familiar with the name Bernie Webber associate him with the miraculous rescue of 32 men off of the stern of the Pendleton, made famous in the book and movie The Finest Hours. Rescuing 32 sailors from a sinking ship caught in a ferocious winter storm is a dramatic tale, but what made this mission so special is that the boat Bernie skippered that terrible night was a mere 36 feet in length and the waves were almost twice that size! Bernie and crew received the Coast Guard’s coveted Gold Lifesaving Medal, and what they did on that stormy night is regarded as the greatest small boat rescue in history.

In Into A Raging Sea, Bernie tells that story, but the book is so much more than that. In these pages you’ll read about rescue attempts that did not turn out well, stories of fishermen from a time long past, rescues done with the by-gone technique of the “breeches buoy,” humorous anecdotes, and what Cape Cod and its people meant to Bernie.

Into a Raging Sea is a story of sacrifice, bravery, disappointment, and challenges. And in the background of Bernie’s journey is one constant, the sea.
--from the forward by Michael J. Tougias

Bernie Webber, the late US Coast Guardsman, is credited for piloting the boat that is responsible for the "greatest small boat rescue" in the history of his service. He is the hero of the book and movie, The Finest Hours, and is played in the movie by actor Chris Pine.

Michael J. Tougias is a lecturer and best-selling author of 20 books. As a public speaker, Tougias regularly gives one hundred presentations or more per year. His books include The Finest Hours, currently being made into a movie by Disney. He lives in Plymouth, MA.