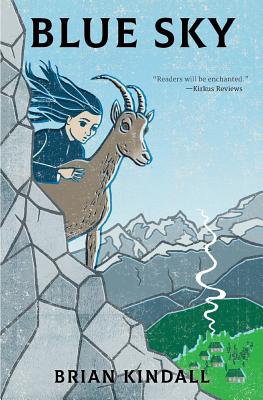 Blue Sky can climb like an ibex. She was raised in the highest peaks of the Alps by the herd and named for the color of her eyes.

They say her father was a fallen alpinist and her mother his beautiful dying dream... and so, as you may guess, she's somewhat magical - strong and sure-footed on the peaks, and natural as an ibex in this harsh environment of wind, rock, and ice.

Until the day she rescues a young alpinist from a stormy peak. The boy looks like her, and he tells her of the mysterious world beyond the crags. Sky longs to follow him. Can a girl raised by ibex in the mountains ever join the world of humans? Blue Sky must first fulfill her destiny with the ibex and find the courage to leave everything she's ever known.

A tale of self-reliance about a girl who finds strength in being who she really is and the courage to follow her dreams.

Brian Kindall is the author of books for both adults and young readers. He believes that the best books are those joining the finest qualities of literature with large doses of adventure. To this end, he crafts his stories with vivid, evocative writing, peopling them with one-of-a-kind characters that will pleasantly haunt the reader well after the book is finished. He draws his inspiration from the classics and popular genres alike, and from the magic he senses lying beneath the surface of life. He does his best to tap this magic and mystery for his novels. In the years in which he was learning to write, Brian worked such adventurous jobs as whitewater raft guide, and as packer for a backcountry hunting camp - experiences which have worked their way into his books. When he's not busy at his desk, you can find him hiking and skiing in the mountains of Central Idaho where he lives with his wife and three kids on the shores of Payette Lake.