The Tears of a Dragon (Paperback) 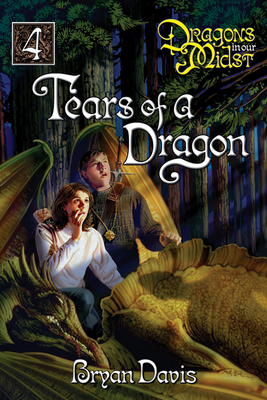 By Bryan Davis
Email or call for price
Hard to Find

This is book number 4 in the Dragons in Our Midst series.

Victory in the Circles of Seven came at a great cost to Billy Bannister and Bonnie Silver. A vicious evil was unleashed on the earth that only the dragons can defeat. With Billy's father, the great Clefspeare, missing, Billy and Bonnie must lead the dragons into war against the Watchers--demonic beings as old as the earth itself. Masters at the art of deception, the Watchers use the deadliest of weapons against mankind. A remnant of wise humans, the friends of the dragons, unite in the struggle against the Watchers. With heart-stopping action, the final battle between dragons and their enemies comes to a climax. But in order to win the war, at least one of the dragons must die.
As the story ends, Billy and Bonnie are faced with the greatest decision of their lives. Will they keep the dragon traits that have cost them so much danger and heartache, or will they turn to normal human life and end the slayers' lust for their blood forever.

Bryan Davis is the author of the best-selling Dragons in Our Midst and Oracles of Fire series, contemporary/fantasy blends for young people. His book Eye of the Oracle hit number one on the January 2007, Young Adult CBA best-seller list. His book The Bones of Makaidos won the 2010 Clive Staples Award, recognizing the best work in Christian worldview speculative fiction. With the September 2010 release of Masters & Slayers, Bryan has begun his first fantasy series for adults, Tales of Starlight. Bryan is a graduate of the University of Florida (B.S. in Industrial Engineering). From the time he taught himself how to read before school age, through his seminary years and beyond, he has demonstrated a passion for the written word, reading and writing in many disciplines and genres, including theology, fiction, devotionals, poetry, and humor. Bryan continues to further his writing education by attending relevant writing conferences and conventions. Bryan is a craftsman with words and an excellent interviewee on various topics, including his books, young adult fantasy fiction, and creative writing in general. He makes appearances around the country for book signings and for special presentations to enthusiastic young readers and developing young authors in middle schools, high schools, and homeschool groups. Although he is now a full time writer, Bryan was a computer professional for over 20 years. Bryan and his wife, Susie, have homeschooled their four girls and three boys.