Reading Lolita in Tehran: A Memoir in Books (Paperback) 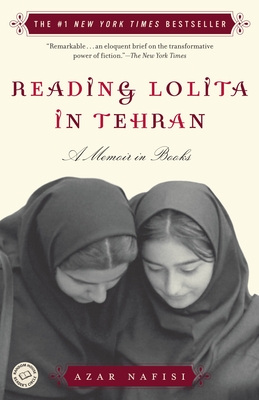 #1 NEW YORK TIMES BESTSELLER • We all have dreams—things we fantasize about doing and generally never get around to. This is the story of Azar Nafisi’s dream and of the nightmare that made it come true.

For two years before she left Iran in 1997, Nafisi gathered seven young women at her house every Thursday morning to read and discuss forbidden works of Western literature. They were all former students whom she had taught at university. Some came from conservative and religious families, others were progressive and secular; several had spent time in jail. They were shy and uncomfortable at first, unaccustomed to being asked to speak their minds, but soon they began to open up and to speak more freely, not only about the novels they were reading but also about themselves, their dreams and disappointments. Their stories intertwined with those they were reading—Pride and Prejudice, Washington Square, Daisy Miller and Lolita—their Lolita, as they imagined her in Tehran.

Nafisi’s account flashes back to the early days of the revolution, when she first started teaching at the University of Tehran amid the swirl of protests and demonstrations. In those frenetic days, the students took control of the university, expelled faculty members and purged the curriculum. When a radical Islamist in Nafisi’s class questioned her decision to teach The Great Gatsby, which he saw as an immoral work that preached falsehoods of “the Great Satan,” she decided to let him put Gatsby on trial and stood as the sole witness for the defense.

Azar Nafisi’s luminous tale offers a fascinating portrait of the Iran-Iraq war viewed from Tehran and gives us a rare glimpse, from the inside, of women’s lives in revolutionary Iran. It is a work of great passion and poetic beauty, written with a startlingly original voice.

Praise for Reading Lolita in Tehran

“Anyone who has ever belonged to a book group must read this book. Azar Nafisi takes us into the vivid lives of eight women who must meet in secret to explore the forbidden fiction of the West. It is at once a celebration of the power of the novel and a cry of outrage at the reality in which these women are trapped. The ayatollahs don’ t know it, but Nafisi is one of the heroes of the Islamic Republic.”—Geraldine Brooks, author of Nine Parts of Desire

Azar Nafisi is a professor at Johns Hopkins University. She won a fellowship from Oxford and taught English literature at the University of Tehran, the Free Islamic University and Allameh Tabatabai University in Iran. She was expelled from the University of Tehran for refusing to wear the veil and left Iran for America in 1997. She has written for The New York Times, The Washington Post, The Wall Street Journal and The New Republic, and is the author of Anti-Terra: A Critical Study of Vladimir Nabokov’s Novels. She lives in Washington, D.C., with her husband and two children.

“Anyone who has ever belonged to a book group must read this book. Azar Nafisi takes us into the vivid lives of eight women who must meet in secret to explore the forbidden fiction of the West. It is at once a celebration of the power of the novel and a cry of outrage at the reality in
which these women are trapped. The ayatollahs don’ t know it, but Nafisi is one of the heroes of the Islamic Republic.”
—Geraldine Brooks, author of Nine Parts of Desire

“I was enthralled and moved by Azar Nafisi’s account of how she defied, and helped others to defy, radical Islam’s war against women. Her memoir contains important and properly complex reflections about the ravages of theocracy, about thoughtfulness, and about the ordeals of freedom—as well as a stirring account of the pleasures and deepening of consciousness that result from an encounter with great literature and with an inspired teacher.”
—Susan Sontag

“When I first saw Azar Nafisi teach, she was standing in a university classroom in Tehran, holding a bunch of red fake poppies in one hand and a bouquet of daffodils in the other, and asking, "What is kitsch?" Now, mesmerizingly, she reveals the shimmering worlds she created in those classrooms,
inside a revolution that was an apogee of kitsch and cruelty. Here, people think for themselves because James and Fitzgerald and Nabokov sing out against authoritarianism and repression. You will be taken inside a culture, and on a journey, that you will never forget.”
—Jacki Lyden, National Public Radio, author of Daughter of the Queen of Sheba

“A memoir about teaching Western literature in revolutionary Iran, with profound and fascinating insights into both. A masterpiece.”
—Bernard Lewis, author of The Crisis of Islam?

“Remarkable...an eloquent brief on the transformative power of fiction.”
—The New York Times

“Certain books by our most talented essayists...carry inside their covers the heat and struggle of a life’s central choice being made and the price being paid, while the writer tells us about other matters, and leaves behind a path of sadness and sparkling loss. Reading Lolita in Tehran is such a book.”
–Mona Simpson, The Atlantic Monthly