Now the Cats With Jeweled Claws & Other One-Act Plays (Paperback) 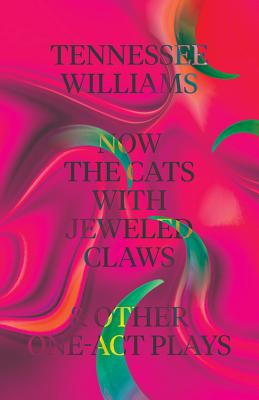 “The peak of my virtuosity was in the one-act plays—like firecrackers in a rope.” —Tennessee Williams

This new collection of fantastic, lesser-known one-acts contains some of Williams’s most potent, comical and disturbing short plays?Upper East Side ladies dine out during the apocalypse in Now the Cats With Jeweled Claws, while the poet Hart Crane is confronted by his mother at the bottom of the ocean in Steps Must Be Gentle. Five previously unpublished plays include A Recluse and His Guest, and The Strange Play, in which we witness a woman’s entire life lived within a twenty-four-hour span. This volume is edited, with an introduction and notes, by the editor, acting teacher, and theater scholar Thomas Keith.

Tennessee Williams (1911–1983) was America’s most influential playwright. Readers have devoured his poetry, essays, short stories, and letters, as well as his fantastic late plays, his remarkable corpus of one-acts, and his greatest plays—The Glass Menagerie, A Streetcar Named Desire, Cat on a Hot Tin Roof, The Night of the Iguana, The Rose Tattoo, Suddenly Last Summer, and Camino Real. Williams is a cornerstone of New Directions—we publish everything he wrote. He is also our single bestselling author.

Born in Cleveland, Ohio, in 1961, Thomas Keith is an editor, as well as production manager and art director, at New Directions Publishing. He lives in New York City.

Mr. Williams is a master of the short play.
— Clive Barnes - The New York Times

Williams was always confronting the future; a shaman with a typewriter, he dug into the darkest depths of the American psyche in search of dramatic truths.
— Randy Gener - American Theatre Magazine

Now the Cats With Jeweled Claws is a loopy send-up of New York society, written in a gleefully absurdist mode.

A Recluse and His Guest has remarkable language; indeed one listens for how the Master keeps showing up in late-career scripts.

From Williams, it seems, there are treasures to be plundered still.
— Laura Collins-Hughes - The New York Times

Steps Must Be Gentle provides a tantalizing peek into Williams’s preoccupation with death, suicide, and creativity.

The fact that This Is the Peaceable Kingdom takes place in New York puts a whole different spin on the play and gives the poetry a different kind of starkness.

The Strange Play and Ivan’s Widow make for intriguing theater, both in their own right and as a part of the legacy of Tennessee Williams—a playwright who prowled the world’s dark corners long before, and long after, he shone under the bright lights of Broadway.

I do not want to reveal too many of The Strange Play’s secrets—its embrace of a whimsical, ethereal, and, yes, strange, world is most pleasing when it is a surprise to the audience.

You won’t forget Now The Cats with Jeweled Claws—I’ve seen quite a few late-period Williams curios but this mesmerizing 1981 piece may be the most demented of them all.

In A Recluse and His Guest, Williams skillfully breaks our hearts.

The Strange Play is delightful and bizarre.

Williams was always confronting the future; a shaman with a typewriter, he dug into the darkest depths of the American psyche in search of dramatic truths.
— Randy Gener - American Theatre

The Demolition Downtown wrings laughter from the plight of a couple whose lives have been ruined by a new political order bent upon demolishing, literally and otherwise, the lives of its citizens.

In A Recluse and His Guest, America’s most poetic playwright brings to life an entire relationship of depth and intimacy, from the first meeting to the last, in an astonishingly short amount of time.