Big Sur and the Oranges of Hieronymus Bosch (Paperback) 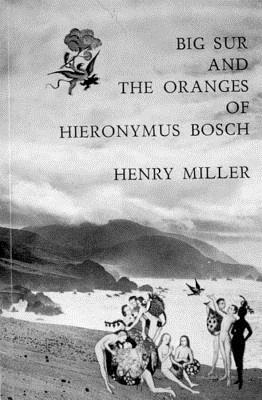 This is book number 161 in the New Directions Paperbook series.

In his great triptych “The Millennium,” Bosch used oranges and other fruits to symbolize the delights of Paradise. Whence Henry Miller’s title for this, one of his most appealing books; first published in 1957, it tells the story of Miller’s life on the Big Sur, a section of the California coast where he lived for fifteen years. Big Sur is the portrait of a place—one of the most colorful in the United States—and of the extraordinary people Miller knew there: writers (and writers who did not write), mystics seeking truth in meditation (and the not-so-saintly looking for sex-cults or celebrity), sophisticated children and adult innocents; geniuses, cranks and the unclassifiable, like Conrad Moricand, the “Devil in Paradise” who is one of Miller’s greatest character studies. Henry Miller writes with a buoyancy and brimming energy that are infectious. He has a fine touch for comedy. But this is also a serious book—the testament of a free spirit who has broken through the restraints and clichés of modern life to find within himself his own kind of paradise.

Henry Miller (1891—1980) was one of the most controversial American novelists during his lifetime. His book, The Tropic of Cancer, was banned in the some U.S. states before being overruled by the Supreme Court. New Directions publishes several of his books.

The only imaginative prose-writer of the slightest value who has appeared among the English-speaking races for some years past.
— George Orwell

American literature today begins and ends with the meaning of what Miller has done.
— Lawrence Durrell

[A] large scale book written with the skill in essay/fictional writing that will help it remain a classic for years to come.
— Innovative Fiction Magazine