Latinos in Chicago: Quest for a Political Voice (Paperback) 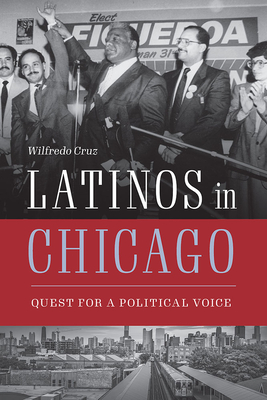 The path to political power for Latinos in Chicago

In the Midwest’s largest city, Latinos have been fighting for political representation for more than half a century. In this exploration of urban politics in Chicago, Wilfredo Cruz shows for the first time how Latinos went from being ignored by the Irish-controlled political machine to becoming a respected constituency.

Beginning with the Latino community’s first attempt to acquire a political voice in Chicago politics in 1911 and continuing through Latino officeholders of the early twenty-first century, Cruz surveys not only the struggles of this community—specifically the two largest Latino groups in the city, Mexicans and Puerto Ricans—but also the ways in which Chicago’s Latinos overcame those challenges to gain their political voice.

For most of the twentieth century, Chicago politicians ignored the growing Latino community. This disregard changed with the 1983 election of Mayor Harold Washington, an African American who defied the political machine and actively recruited Latinos to his administration and helped them win city and statewide political offices. His actions opened the doors of government for Latinos in Chicago. Subsequent mayors, seeing the political success of Washington’s move, continued his policies.

Many up-and-coming Latino politicians making strides in Chicago, including state representative Aarón Ortíz, Alderman Andre Vasquez, and Alderman Rossana Rodríguez-Sanchez, contribute their takes on the struggle for political power and the challenges facing the rising new generation of elected officials. With this book, Cruz asks and answers this question: What does the future hold for Latinos politically in Chicago?

Wilfredo Cruz, an associate professor at Columbia College Chicago, is the author of multiple books, including City of Dreams: Latino Immigration to Chicago and Chicago Latinos at Work. A former investigative reporter for the Chicago Reporter, Cruz has also served as assistant press secretary to Chicago mayor Harold Washington and as director of the Office of Public Information at the Chicago Public Library.

“Latinos in Chicago is a major contribution to Chicago political history. It is an important account of minority empowerment as the struggle for political voice and recognition is occurring throughout America. After more than a century of political battles, Latinos are coming into power in Chicago and America. This is a tale to be told beyond Chicago as an inspiration for the new America being born.”—Dick Simpson, coeditor of Twenty-First Century Chicago

“This book is a thorough recounting of the multiple Latino groups’ search for voice in city politics. Combining media accounts and oral interviews, Cruz takes us through the good, the bad, and the ugly of finding a place on Chicago’s political table.”—Maria de los Angeles Torres, author of The Lost Apple: Operation Pedro Pan, Cuban Children in the US and the Promise of a Better Future