Righteous Propagation: African Americans and the Politics of Racial Destiny After Reconstruction (Paperback) 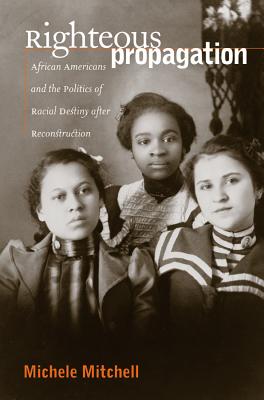 By Michele Mitchell
$43.95
Ships from our supplier - you choose to your home or to the store

Between 1877 and 1930--years rife with tensions over citizenship, suffrage, immigration, and the Negro problem--African American activists promoted an array of strategies for progress and power built around racial destiny, the idea that black Americans formed a collective whose future existence would be determined by the actions of its members. In Righteous Propagation, Michele Mitchell examines the reproductive implications of racial destiny, demonstrating how it forcefully linked particular visions of gender, conduct, and sexuality to collective well-being.

Mitchell argues that while African Americans did not agree on specific ways to bolster their collective prospects, ideas about racial destiny and progress generally shifted from outward-looking remedies such as emigration to inward-focused debates about intraracial relationships, thereby politicizing the most private aspects of black life and spurring race activists to calcify gender roles, monitor intraracial sexual practices, and promote moral purity. Examining the ideas of well-known elite reformers such as Mary Church Terrell and W. E. B. DuBois, as well as unknown members of the working and aspiring classes, such as James Dubose and Josie Briggs Hall, Mitchell reinterprets black protest and politics and recasts the way we think about black sexuality and progress after Reconstruction.