The Young Crusaders: The Untold Story of the Children and Teenagers Who Galvanized the Civil Rights Movement (Paperback) 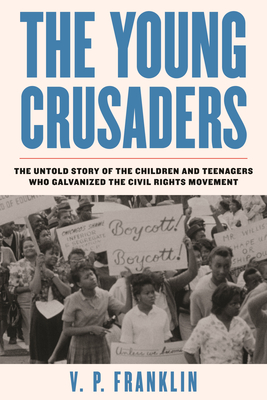 An authoritative history of the overlooked youth activists that spearheaded the largest protests of the Civil Rights Movement and set the blueprint for future generations of activists to follow.

Some of the most iconic images of the Civil Rights Movement are those of young people engaged in social activism, such as children and teenagers in 1963 being attacked by police in Birmingham with dogs and water hoses. But their contributions have not been well documented or prioritized. The Young Crusaders is the first book dedicated to telling the story of the hundreds of thousands of children and teenagers who engaged in sit-ins, school strikes, boycotts, marches, and demonstrations in which Dr. Martin Luther King Jr. and other national civil rights leaders played little or no part.

It was these young activists who joined in the largest civil rights demonstration in US history: the system-wide school boycott in New York City on February 3, 1964, where over 360,000 elementary and secondary school students went on strike and thousands attended freedom schools. Later that month, tens of thousands of children and teenagers participated in the “Freedom Day” boycotts in Boston and Chicago, also demanding “quality integrated education.”

Distinguished historian V. P. Franklin illustrates how their ingenuity made these and numerous other campaigns across the country successful in bringing about the end to legalized racial discrimination. It was these unheralded young people who set the blueprint for today’s youth activists and their campaigns to address poverty, joblessness, educational inequality, and racialized violence and discrimination. Understanding the role of children and teenagers transforms how we understand the Civil Rights Movement and the broader part young people have played in shepherding social and educational progress, and it serves as a model for the youth-led “reparatory justice” campaigns seen today mounted by Black Lives Matter, March for Our Lives, and the Sunrise Movement.

Highlighting the voices of the young people themselves, Franklin offers a redefining narrative, complemented by arresting archival images. The Young Crusaders reveals a radical history that both challenges and expands our understanding of the Civil Rights Movement.

V. P. Franklin is Distinguished Professor Emeritus of History and Education at the University of California, Riverside. He has served as the Editor of The Journal of African American History (2001-2018) and is the author of books including Living Our Stories, Telling Our Truths: Autobiography and the Making of the African American Intellectual Tradition, and co-author of My Soul Is a Witness: A Chronology of the Civil Rights Era, 1954–1965.

“Lively history of the teenagers and young adults who fought some of the hardest battles of the civil rights movement . . . A compelling narrative that sheds light on a little-known aspect of the struggle for social justice.”
—Kirkus Reviews

“Celebrates the young people who became activists and changed the country for getting into ‘good trouble,’ as the late US Rep. John Lewis put it.”
—San Francisco Chronicle Datebook

“In The Young Crusaders, V. P. Franklin reveals that the entire history of civil rights protest has depended in large measure on activism by children and teenagers. Covering events in nearly fifty cities, the book is stunning in its breadth and proves the undeniable impact and courage of these youthful activists. Their voices and stories resonate powerfully today, and should energize and inspire a new generation of young activists in their fight for reparations and equality.”
—Mary Frances Berry, Geraldine R. Segal Professor of American Social Thought and Professor of History and Africana Studies, University of Pennsylvania, and author of History Teaches Us to Resist

“Filling a void in our understanding of the civil rights movement, V. P. Franklin presents the remarkable and largely untold story of young peoples’ central role in the movement. The Young Crusaders reveals the unheralded work of children and teens, showcasing the incredible power of youth activism for our time, for all time.”
—Ibram X. Kendi, National Book Award–winning and #1 New York Times best-selling author

“Few make history jump off the pages like V. P. Franklin, one of the field’s most prominent and thoughtful historians. The Young Crusaders will stand as the definitive untold history of young people getting into ‘good trouble’ for racial justice. Franklin documents the relentless history of young people resisting and launching social justice campaigns for civil rights, educational justice, Black Power, and reparations. Both revelatory as well as a joy to read, it is a profound reflection on the power of young crusaders to change the world.”
—Bettina Love, author of We Want To Do More Than Survive: Abolitionist Teaching and the Pursuit of Educational Freedom

“The Civil Rights Movement overthrew Jim Crow and changed America. While famous leaders like Dr. King are well known, it is not widely known that actions by Black children and teenagers were crucial to the movement’s success. These youth faced death, injury, attack dogs, imprisonment, and rebuke as they courageously fought as movement foot soldiers to destroy a vicious system of racism. Through meticulous research and analysis, V. P. Franklin presents the voices of these children to document how they toppled legalized racial oppression. For the first time, their revelatory and powerful stories are articulated here in The Young Crusaders.”
—Aldon Morris, author of The Origins of the Civil Rights Movement: Black Communities Organizing for Change and president of the American Sociological Association

“V. P. Franklin’s The Young Crusaders is a revelation, profoundly broadening our understanding of the Civil Rights Movement and the essential role of Black youth in revolutionary movements of the past and today. It is a must-read—brilliantly conceived and researched, beautifully written, and deeply moving.”
—Brenda E. Stevenson, author of The Contested Murder of Latasha Harlins: Justice, Gender, and the Origins of the LA Riots