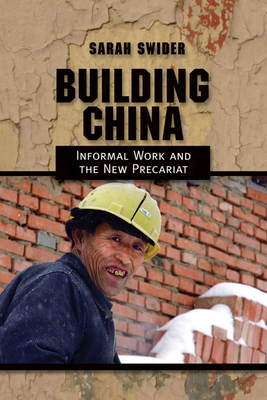 By Sarah Swider
$32.34
Ships from our supplier - you choose to your home or to the store

Roughly 260 million workers in China have participated in a mass migration of peasants moving into the cities, and construction workers account for almost half of them. In Building China, Sarah Swider draws on her research in Beijing, Guangzhou, and Shanghai between 2004 and 2012, including living in an enclave, working on construction jobsites, and interviews with eighty-three migrants, managers, and labor contractors. This ethnography focuses on the lives, work, family, and social relations of construction workers. It adds to our understanding of China's new working class, the deepening rural-urban divide, and the growing number of undocumented migrants working outside the protection of labor laws and regulation. Swider shows how these migrants--members of the global precariat, an emergent social force based on vulnerability, insecurity, and uncertainty--are changing China's class structure and what this means for the prospects for an independent labor movement.The workers who build and serve Chinese cities, along with those who produce goods for the world to consume, are mostly migrant workers. They, or their parents, grew up in the countryside; they are farmers who left the fields and migrated to the cities to find work. Informal workers--who represent a large segment of the emerging workforce--do not fit the traditional model of industrial wage workers. Although they have not been incorporated into the new legal framework that helps define and legitimize China's decentralized legal authoritarian regime, they have emerged as a central component of China's economic success and an important source of labor resistance.