The Healing of Natalie Curtis (Paperback) 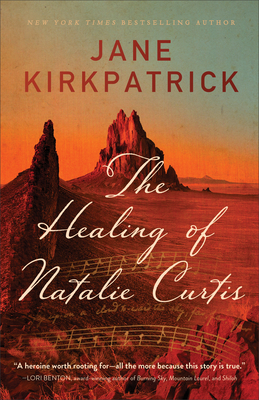 Classically trained pianist and singer Natalie Curtis isolated herself for five years after a breakdown just before she was to debut with the New York Philharmonic. Guilt-ridden and songless, Natalie can't seem to recapture the joy music once brought her. In 1902, her brother invites her to join him in the West to search for healing. What she finds are songs she'd never before encountered--the haunting melodies, rhythms, and stories of Native Americans.

But their music is under attack. The US government's Code of Offenses prohibits American's indigenous people from singing, dancing, or speaking their own languages as the powers that be insist on assimilation. Natalie makes it her mission not only to document these songs before they disappear but to appeal to President Teddy Roosevelt himself, who is the only man with the power to repeal the unjust law. Will she succeed and step into a new song . . . and a new future?

Award-winning author Jane Kirkpatrick weaves yet another lyrical tale based on a true story that will keep readers captivated to the very end.


"Reaching from New York to the American Southwest, this tale focuses on resiliency . . . Kirkpatrick's reflective and informative novel inspires readers to consider their own motives and choices and the sometimes unintended consequences of the help they give."--Booklist

"Kirkpatrick's portrayal of Natalie's fight for equality and cultural preservation will resonate with readers. Those who enjoy the work of Francine Rivers should take a look."--Publishers Weekly

Jane Kirkpatrick is the New York Times and CBA bestselling and award-winning author of 40 books, including Something Worth Doing, One More River to Cross, Everything She Didn't Say, All Together in One Place, A Light in the Wilderness, The Memory Weaver, This Road We Traveled, and A Sweetness to the Soul, which won the prestigious Wrangler Award from the Western Heritage Center. Her works have won the WILLA Literary Award, the Carol Award for Historical Fiction, and the 2016 Will Rogers Gold Medallion Award. Jane divides her time between Central Oregon and California with her husband, Jerry, and Cavalier King Charles Spaniel, Caesar. Learn more at www.jkbooks.com.