After: A Novel (Paperback) 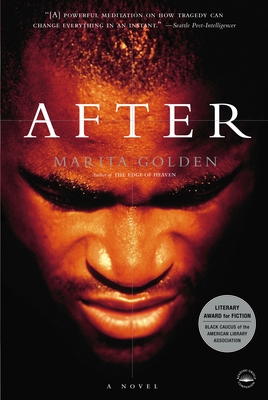 In her long-awaited fifth novel, acclaimed writer Marita Golden takes another unflinching look into the face of family, race, love and identity.

For twelve years Carson Blake inhabited a world of his own creation. Scorned by the father who was incapable of showing him affection and nearly consumed by the mean streets of Prince George’s County, Maryland, Carson did what no one else could: he saved himself.
After joining the police force and building a family with his wife, Bunny, Carson is finally in control of his life in the enclave where African American wealth and privilege shares the same zip code with black American crime and tragedy. Both Carson and his wife have great careers and three beautiful children: Roslyn, Roseanne, and Juwan. Carson is a devoted father, determined not to be the father that Jimmy Blake was to him. But while Juwan’s astounding artistic talent is his father’s pride, the boy’s close relationship with classmate Will conjures up emotions and questions in Carson that threaten to spill over and poison the entire Blake family.
And then, one night in March, nearing the end of a routine shift, Carson stops a young black man for speeding. He orders Paul Houston to exit the car and drop to his knees. But when Houston retrieves something from his waistband and turns to face Carson, three shots are fired, one man loses his life and two families are wrenched from everything that came before and hurled into the haunting future of everything that will come after. When it is revealed that Paul, a son of educators and a teacher in Southeast D.C., was only holding a cell phone, Carson’s carefully woven world begins to unravel.
After is a penetrating work of discovery for a man whose life careens more than once off the edge of disaster. Golden’s astounding prose will stay with you long after you’ve turned the last page.

MARITA GOLDEN is the author of works of both fiction and nonfiction. Her books include Migrations of the Heart, Saving Our Sons, and most recently, Don’t Play in the Sun. She is the founder of the Hurston/Wright Foundation, an organization that supports African American writers. She lives in Mitchellville, Maryland.

Praise for the previous works of Marita Golden

“Marita Golden’s novel [The Edge of Heaven] brings us—with sensitivity and deft artistry—the precious stories of three generations of women in the aftermath of a tragedy that has torn each from herself and each from the others. Golden’s women are altogether knowable and most unforgettable: their struggle to find their way back to some tiny form of normalcy will make a place in a reader’s memory and heart.”
—Edward P. Jones, Author of The Known World

“Golden has a rare gift for the poetry of language.” —San Francisco Examiner and Chronicle

“[Long Distance Life is] a novel of impressive artistry and power.” —Washington Post