Stompin' at the Savoy: The Story of Norma Miller (Hardcover) 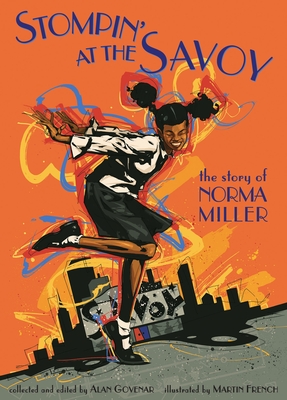 When she was just five years old, in 1924, Norma Miller knew just what she wanted to do for the rest of her life: she wanted to dance. It was the Jazz Age, the Harlem Renaissance, and Norma lived behind New York’s Savoy Ballroom, the only dance hall in a still-segregated America where blacks and whites could mingle on the same mahogany floor. It was in this majestic "home of happy feet" that twelve-year-old Norma first brought the house down, swing-stepping with Twist Mouth George, one of the premier dancers of the day. Before long, the feisty Norma would rise to fame as one of the first performers of the Lindy Hop, an acrobatic dance style named for Charles Lindbergh’s first solo flight (or "hop") across the Atlantic. With the celebrated dance troupe Whitey’s Lindy Hoppers, a teenage Norma would cross the Atlantic herself on a tour of Europe and even strut her stuff on the silver screen.

In this invigorating, humorous, and thought-provoking oral autobiography, Alan Govenar captures the sound and spirit of Norma Miller’s voice as she recalls her early years and coming of age as a determined young dancer during the heyday of swing. Augmenting her lively narrative are Martin French’s jazzy, singlecolor illustrations, evoking the vibrant style of vintage poster art.

Norma Miller got her start as a professional dancer as a teenager, when she was invited to join the swing dance troupe, Whitey’s Lindy Hoppers. By the late 1930s, the Lindy Hoppers were internationally renowned. In 2003, the National Endowment for the Arts honored Norma Miller with a National Heritage Fellowship, the highest form of federal recognition for folk and traditional artists in America. Norma Miller lives in Florida, where she continues to teach, choreograph, dance, and "swing, baby, swing!"

Alan Govenar is a filmmaker, photographer, folklorist, and writer. In 1985, he founded Documentary Arts, Inc., a nonprofit organization dedicated to presenting new perspectives on different cultures. He has authored numerous books, including Osceola: Memories of a Sharecropper's Daughter, winner of a Boston Globe-Horn Book Award in Nonfiction. Alan’s friendship and conversations with Norma Miller began in 2001. Those conversations formed the foundation of this oral autobiography. Alan Govenar lives in Texas.

Martin French is an award-winning artist who has provided illustrations for the 2005 Grammy Awards, for jazz festivals and for several children's books including The Scarecrow's Dance and Sophisticated Ladies. He lives in Oregon, USA.