Muhammad Najem, War Reporter: How One Boy Put the Spotlight on Syria (Hardcover) 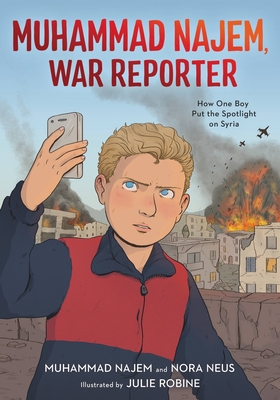 A teenage boy risks his life to tell the truth in this gripping graphic memoir by youth activist Muhammad Najem and CNN producer Nora Neus.

“A story of journalism at its most inspiring, its most heartbreaking, its most essential. Muhammad is a reporter who brings hope to a damaged world.”
—John Berman, CNN anchor


“A powerful true story that demonstrates the power of one young person determined to change the world. Everyone should read this phenomenal book.” —Victoria Jamieson, coauthor of When Stars Are Scattered


“What an amazing story this is! One family’s struggle for survival in the chaos of Syria, and one boy’s courageous decision to risk his life to tell the story. This graphic memoir is inspiring and exciting, powerful and very poignant. I loved it!” —Anderson Cooper


Muhammad Najem was only eight years old when the war in Syria began. He was thirteen when his beloved Baba, his father, was killed in a bombing while praying. By fifteen, Muhammad didn’t want to hide anymore—he wanted to act. He was determined to reveal what families like his were enduring in Syria: bombings by their own government and days hiding in dark underground shelters.

Armed with the camera on his phone and the support of his family, he started reporting on the war using social media. He interviewed other kids like him to show what they hope for and dream about. More than anything, he did it to show that Syrian kids like his toddler brother and infant sister, are just like kids in any other country. Despite unimaginable loss, Muhammad was always determined to document the humanity of the Syrian people. Eventually, the world took notice.

This tenderly illustrated graphic memoir is told by Muhammad himself along with CNN producer Nora Neus, who helped break Muhammad’s story and bring his family’s plight to an international audience.

Muhammad Najem is an internationally recognized journalist from Eastern Ghouta, Syria. He began his reporting career as a child, under near-constant bombardment by the Assad regime, by taking videos on his cheap cell phone and posting them on social media. His story went viral in 2018, putting a target on his and his family’s backs. In 2019, he and his family fled Syria and moved to Turkey. Muhammad loves video games, association football, hanging out with friends, and playing with his little brother and sister. He invites you to visit him at muhammadnajem.com

Nora Neus is an Emmy-award nominated journalist and writer living in Brooklyn, New York. She has reported from inside a maximum-security prison, from 14,000 feet above sea level in the San Juan Mountains, and from rural Puerto Rico after devastating earthquakes. Nora studied the Syrian conflict for her MA in War Studies from King’s College London. She started her journalism career as a child, writing a newspaper called Neus News for her family and friends. She invites you to visit her at noraneus.com.
Julie Robine is a French-American designer and illustrator based in Brooklyn. Since graduating from RISD in 2015, she has worked on a wide variety of projects, with clients like Little, Brown & Co., Victory Magazine, Barnes & Noble, and more. A middle child, she has been drawing since realizing it was the only thing she was better at than her sisters. Her favorite things include horror podcasts and learning about maligned women in history. She loves drawing characters and crafting their worlds, and reading as many graphic novels as possible. You can find her on Instagram @heyhijulie and at julierobine.com.

"What an amazing story this is! One family’s struggle for survival in the chaos of Syria, and one boy’s courageous decision to risk his life to tell the story. This graphic memoir is inspiring and exciting, powerful and very poignant. I loved it!"—Anderson Cooper

“A powerful true story that demonstrates the power of one young person determined to change the world. Everyone should read this phenomenal book.”—Victoria Jamieson, coauthor of When Stars Are Scattered

*"Najem, Neus, and Robine put the graphic format to powerful use to depict the devastation of the Assad regime in Syria through the eyes of young Najem...The power of graphic nonfiction is on fully display here. Highly recommended."—School Library Journal, starred review

"Readers will find this a valuable window into the struggle, resistance, and humanity of the Syrian people during this ongoing crisis. Informative, gripping, and humanizing."—Kirkus Reviews

"With expressive full-color illustrations, a moving and powerful narrative that features moments of loss as well as love, and powerful message about resistance and the capabilities of youth, this memoir stands out, and it does an excellent job of providing middle-grade readers with an illuminating window into the complex ongoing crisis."—Booklist

“A story of journalism at its most inspiring, its most heartbreaking, its most essential. Muhammad is a reporter that brings hope to a damaged world.”—John Berman, CNN anchor

“A beautiful book about an incredible boy. In telling Muhammad’s story, Neus simultaneously captures the extraordinary sincerity and courage of so many young Syrians, against the backdrop of a hideous war. Children everywhere should read this inspiring book.”