Her Fearful Symmetry: A Novel (CD-Audio) 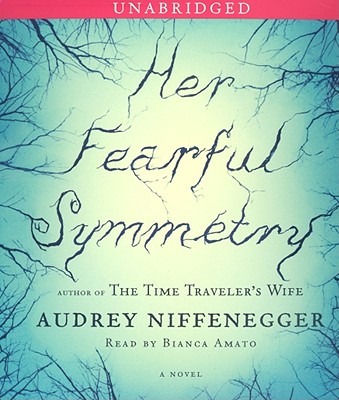 By Audrey Niffenegger, Bianca Amato (Read by)
Email or call for price
Hard to Find

From the author of the #1 bestselling The Time Traveler's Wife, a spectacularly compelling novel—set in and near Highgate Cemetery in London, about the love between twins, men and women, ghosts and the living.

Julia and Valentina Poole are twenty-year-old sisters with an intense attachment to each other. One morning the mailman delivers a thick envelope to their house in the suburbs of Chicago. Their English aunt Elspeth Noblin has died of cancer and left them her London apartment. There are two conditions for this inheritance: that they live in the flat for a year before they sell it and that their parents not enter it. Julia and Valentina are twins. So were the girls’ aunt Elspeth and their mother, Edie.

The girls move to Elspeth’s flat, which borders the vast Highgate Cemetery, where Christina Rossetti, George Eliot, Stella Gibbons, and other luminaries are buried. Julia and Valentina become involved with their living neighbors: Martin, a composer of crossword puzzles who suffers from crippling OCD, and Robert, Elspeth’s elusive lover, a scholar of the cemetery. They also discover that much is still alive in Highgate, including—perhaps—their aunt.

Audrey Niffenegger is a visual artist and a guide at Highgate Cemetery. In addition to the bestselling novels The Time Traveler’s Wife and Her Fearful Symmetry, she is the author of three illustrated novels, The Three Incestuous Sisters, The Adventuress, and The Night Bookmobile, and the editor of Ghostly. She lives in Chicago.

"The endurance of love animates this gothic story set in and around Highgate Cemetery in London. Niffenegger's prose can be wearyingly overblown, but she has a knack for taking the romantic into the realm of creepiness, and she constructs a taut mystery around the secrets... It's no small achievement that the revelations are both organic and completely unexpected." -- The New Yorker

"Bewitching...Lovers of Niffenegger's past work should rejoice... Her Fearful Symmetry is as atmospheric and beguiling as a walk through Highgate itself." -- Susann Cokal, New York Times Book Review (front page)

"A compelling modern-day ghost story set in and around London's atmospheric Highgate cemetery...An engrossing love story that crosses to the 'other side,' Symmetry offers an inventive take on sibling rivalry, personal identity and what it's like to be dead." -- People (3 1/2 stars)

"Niffenegger piles on plenty of action... The book's end [is] a genuine surprise... Elspeth's death ... is moving, as is Robert's surprising immediate reaction to it... [Martin] is intricate and fascinating, especially because of Niffenegger's ability to get inside his head.... Niffenegger is especially good on the subject of twins... [She] deftly plumbs the depths of her subject, showing a profound and imaginative understanding." -- Martin Rubin, Los Angeles Times

"Niffenegger is an extraordinarily sensitive and accomplished writer, and Her Fearful Symmetry is a work of lovely delicacy." -- Lev Grossman, Time

"Following up a phenomenal blockbuster is not easy, but Niffenegger rises to the task with Her Fearful Symmetry. Fans will find plenty of rewards in her clever ... [and] unique modern ghost story... Her descriptions transport the reader directly into a moody Victorian landscape of beauty and death... Mesmerizing... A deeply moving story filled with unforgettable characters... A beautiful testament to Niffenegger's fertile imagination and love of storytelling." -- Mary Houlihan, Chicago Sun-Times

"An intriguing look at kinship and the danger of getting what you wished for." -- Good Housekeeping

"Entertaining... The reader is pleasantly carried along by the author's ability to create credible characters and her instinctive narrative gifts." -- Michiko Kakutani, New York Times