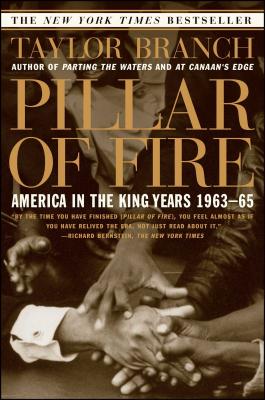 By Taylor Branch
$22.00
Ships from our supplier - you choose to your home or to the store

In the second volume of his three-part history, a monumental trilogy that began with Parting the Waters, winner of the Pulitzer Prize and the National Book Critics Circle Award, Taylor Branch portrays the Civil Rights Movement at its zenith, recounting the climactic struggles as they commanded the national stage.

Beginning with the Nation of Islam and conflict over racial separatism, Pillar of Fire takes the reader to Mississippi and Alabama: Birmingham, the murder of Medgar Evers, the "March on Washington," the Civil Rights Act, and voter registration drives. In 1964, King is awarded the Nobel Peace Prize.

Branch's magnificent trilogy makes clear why the Civil Rights Movement, and indeed King's leadership, are among the nation's enduring achievements. In bringing these decades alive, preserving the integrity of those who marched and died, Branch gives us a crucial part of our history and heritage.

Richard Bernstein The New York Times By the time you have finished [Pillar of Fire], you feel almost as if you have relieved the era, not just read about it.

James Goodman The Boston Globe This is jet-propelled history.

Jon Meacham Newsweek Pillar of Fire is a magisterial history of one of the most tumultuous periods in postwar America. Branch's storytelling is strong, his storytelling colorful. Reading Branch, it is easier to see why even the most remarkable revolutions are never complete.

Alan Wolfe The New York Times Book Review As he did in Parting the Waters, Branch brings to these events both a passion for their detail and a recognition of their larger historical significance.

Ray Jenkins The Baltimore Sun Branch has an uncanny ability to penetrate the most obscure nooks and crannies of the past to provide a whole new perpective on the Sixties...

Bill Maxwell St. Petersburg Times Pillar of Fire, a history of symbiosis and epiphany, records King's vision and the disparate moral currents that forced America to redefine itslef in light of its failures to live up to its own principles of freedom.

Trevor Coleman Detroit Free Press The strength of Pillar of Fire lies in Branch's unsurpassed ability to bring the reader into the moment, enabling one to almost feel the tension of the times.