On the Farm: Robert William Pickton and the Tragic Story of Vancouver's Missing Women (Paperback) 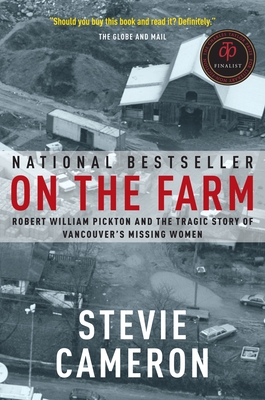 Verteran investigative journalist Stevie Cameron first began following the story of missing women in 1998, when the odd newspaper piece appeared chronicling the disappearances of drug-addicted sex trade workers from Vancouver's notorious Downtown Eastside. It was not until February 2002 that pig farmer Robert William Pickton would be arrested, and 2008 before he was found guilty, on six counts of second-degree murder. These counts were appealed and in 2010, the Supreme Court of Canada rendered its conclusion. The guilty verdict was upheld, and finally this unprecedented tale of true crime could be told.


Covering the case of one of North America's most prolific serial killers gave Stevie Cameron access not only to the story as it unfolded over many years in two British Columbia courthouses, but also to information unknown to the police - and not in the transcripts of their interviews with Pickton - such as from Pickton's long-time best friend, Lisa Yelds, and from several women who survived terrifying encounters with him. Cameron uncovers what was behind law enforcement's refusal to believe that a serial killer was at work.

A woman of many talents, Stevie Cameron is a successful author, investigative journalist, commentator and humanitarian. Her investigative reports have been published by the Globe and Mail and Maclean's, among others, and her award-winning books have brought scandals to the public eye. They include the #1 national bestseller On the Take: Crime, Corruption and Greed in the Mulroney Years and The Last Amigo: Karlheinz Schreiber and the Anatomy of a Scandal, winner of the Crime Writers of Canada Arthur Ellis Award. Cameron's passions for writing, uncovering and dissecting stories of the day have earned her acclaim as one of Canada's foremost investigative journalists. She lives in Toronto.

“Rich with detail. . . . Should you buy this book and read it? Definitely.”
— Neil Boyd, The Globe and Mail

"Stevie Cameron, who brought the art of political investigative journalism in Canada to new heights over the last three decades, has distinguished herself and her profession once again… [On the Farm] will surely remain a classic for generations of crime readers to come."
— Winnipeg Free Press

"On the Farm is the book you were hoping for… A hard-hitting look at the botched police investigations of Pickton."
— The Vancouver Sun

"No writer knows this story better than Cameron… [On the Farm] will go down as the definitive resource on the Pickton affair."
— Maclean's

"Stevie Cameron has written yet another great book exposing, as is her wont, the 'comfortable establishment' in our country of indifference to societal ills that might be expensive nuisances to deal with."
— The Tyee