Bunker Hill: A City, a Siege, a Revolution (The American Revolution Series #1) (Hardcover) 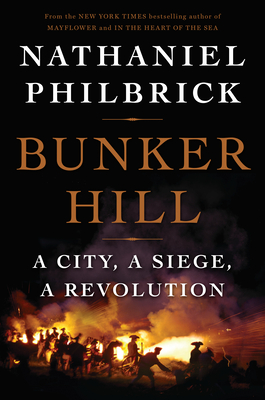 This is book number 1 in the The American Revolution Series series.

The bestselling author of In the Heart of the Sea, Mayflower, and In the Hurricane's Eye tells the story of the Boston battle that ignited the American Revolution, in this "masterpiece of narrative and perspective." (Boston Globe)

In the opening volume of his acclaimed American Revolution series, Nathaniel Philbrick turns his keen eye to pre-Revolutionary Boston and the spark that ignited the American Revolution. In the aftermath of the Boston Tea Party and the violence at Lexington and Concord, the conflict escalated and skirmishes gave way to outright war in the Battle of Bunker Hill. It was the bloodiest conflict of the revolutionary war, and the point of no return for the rebellious colonists. Philbrick gives us a fresh view of the story and its dynamic personalities, including John Adams, Samuel Adams, John Hancock, Paul Revere, and George Washington. With passion and insight, he reconstructs the revolutionary landscape—geographic and ideological—in a mesmerizing narrative of the robust, messy, blisteringly real origins of America.

Nathaniel Philbrick grew up in Pittsburgh, Pennsylvania, and earned a BA in English from Brown University and an MA in America Literature from Duke University, where he was a James B. Duke Fellow. He was Brown University’s first Intercollegiate All-American sailor in 1978, the same year he won the Sunfish North Americans in Barrington, RI. After working as an editor at Sailing World magazine, he wrote and edited several books about sailing, including The Passionate Sailor, Second Wind, and Yaahting: A Parody.

In 1986, Philbrick moved to Nantucket with his wife Melissa and their two children. In 1994, he published his first book about the island’s history, Away Off Shore, followed by a study of the Nantucket’s native legacy, Abram’s Eyes. He was the founding director of Nantucket’s Egan Maritime Institute and is still a research fellow at the Nantucket Historical Association.

In 2000, Philbrick published the New York Times bestseller In the Heart of the Sea, which won the National Book Award for nonfiction. The book is the basis of the forthcoming Warner Bros. motion picture “Heart of the Sea,” directed by Ron Howard and starring Chris Hemsworth, Cillian Murphy, Brendan Gleeson, Benjamin Walker, Ben Wishaw, and Tom Holland, which is scheduled for release in March, 2015. The book also inspired a 2001 Dateline special on NBC as well as the 2010 two-hour PBS American Experience film “Into the Deep” by Ric Burns.

His next book was Sea of Glory, published in 2003, which won the Theodore and Franklin D. Roosevelt Naval History Prize and the Albion-Monroe Award from the National Maritime Historical Society. The New York Times Bestseller Mayflower was a finalist for both the 2007 Pulitzer Prize in History and the Los Angeles Times Book Award, won the Massachusetts Book Award for nonfiction, and was named one the ten Best Books of 2006 by the New York Times Book Review. Mayflower is currently in development as a limited series on FX.

In 2010, he published the New York Times bestseller The Last Stand, which was named a New York Times Notable book, a 2010 Montana Book Award Honor Book, and a 2011 ALA Notable Book. Philbrick was an on-camera consultant to the two-hour PBS American Experience film “Custer’s Last Stand” by Stephen Ives. The book is currently being adapted for a ten-hour, multi-part television series. The audio book for Philbrick’s Why Read Moby-Dick? (2011) made the ALA's Listen List in 2012 and was a finalist for the New England Society Book Award.

Philbrick’s latest New York Times bestseller, Bunker Hill:  A City, a Siege, a Revolution, was published in 2013 and was awarded both the 2013 New England Book Award for Non-Fiction and the 2014 New England Society Book Award. Bunker Hill won the 2014 book award from the Society of Colonial Wars, and has been optioned by Warner Bros. for feature film adaptation with Ben Affleck attached to direct.

Philbrick’s writing has appeared in Vanity Fair, the New York Times Book Review, the Wall Street Journal, the Los Angeles Times, and the Boston Globe. He has appeared on the Today Show, the Morning Show, Dateline, PBS’s American Experience, C-SPAN, and NPR. He and his wife still live on Nantucket.

“A masterpiece of narrative and perspective…”—Boston Globe

“You will delight in the story and the multitude of details Philbrick offers up.”—USA Today

“This is popular history at its best: a taut narrative with a novelist’s touch, grounded in careful research.”—Miami Herald

“Philbrick … has a flair for using primary sources to create scenes that sweep readers into the thick of history…BUNKER HILL is a tour de force, creating as vivid a picture as we are likely to get of the first engagements of the American Revolution…Philbrick is a gifted researcher and storyteller…”—Chicago Tribune

“Philbrick…offers…surprising revelations and others in BUNKER HILL, a comprehensive and absorbing account of a battle…Extraordinary events produce extraordinary individuals, and Philbrick’s portrayals are remarkably penetrating and vivid…Given the scale of the story, Philbrick, confirming his standing as one of America’s pre-eminent historians, somehow manages to address all the essential components in a concise, readable style”—Cleveland Plain Dealer

“Like a masterly chronicler, [Philbrick] has produced a tightly focused and richly detailed narrative that just happens to resonate with leadership lessons for all times….Philbrick is at his most vivid in conveying scenes of battle, both on the road between Boston and Concord and on the ridges of Bunker Hill. But what adds depth to the narrative is his fine sense of the ambitions that drive people in war and politics.”
—Washington Post

“Though you know the ending, you whip through the pages…”—Entertainment Weekly

“Quite masterfully, Philbrick does not sink to simply good and evil distinctions in the run-up to Bunker Hill. The author reminds us that the freedoms colonists wanted were never intended to apply to blacks, American Indians or women. This was a messy time when decisions were sometimes dictated by ambition instead of some nobler trait.”—Minneapolis Star-Tribune

“[Philbrick] captures the drama—martial and emotional—of the months before and after this legendary clash.”—The New Yorker

“Philbrick spices his text with first-person accounts from many participants in the drama, including patriots, loyalists, generals, privates, spies, even the victim of a tar-and-feathering. This is easy-reading history, uncluttered by footnotes and assisted by some excellent maps.”—Seattle Times

“Fascinating….No one can tell you about the history you thought you knew quite like Philbrick…”
—Cape Cod Times

“Philbrick … will be a candidate for another award with this ingenious, bottom-up look at Boston from the time of the December 1773 Tea Party to the iconic June 1775 battle….A rewarding approach to a well-worn subject, rich in anecdotes, opinion, bloodshed and Byzantine political maneuvering.”—Kirkus (Starred Review)

“Philbrick tells his tale in traditional fashion—briskly, colorfully, and with immediacy….no one has told this tale better.”—Publishers Weekly

“Crackling accounts of military movements…a superior talent for renewing interest in a famed event, Philbrick will again be in high demand from history buffs.”—Booklist

“Philbrick shows us historic figures, not only as if they had stepped away from their famous portraits, but as if we had read about them in last week’s newspaper…Philbrick has developed a style that connects the power of narrative to decisive moments in American history.” —Nantucket Today

“Philbrick’s research is phenomenal …I suggest you pick up this enjoyable read.” —Washington Independent Review of Books

“You’ll never have history told like this in school. If it were, you might find more kids interested in it.” —The State Journal-Register
“A gripping, suspense-driven recounting of the battles of Bunker and Breed’s Hill…I couldn’t put this book down with its seductive, detail-sharpened, heart-stopping narrative made all the more human by the people involved…powerful, eloquent, infinitely compelling, and just plain awesome.” —Providence Journal