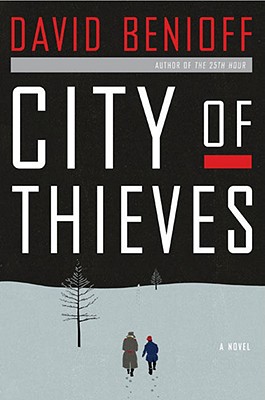 By David Benioff
Email or call for price
Special Order

“During the siege of Leningrad in WWII, two young men are sent on an improbable errand. The horror of war is only heightened by the lightness with which Benioff handles their evolving friendship and the grim task that evolves from their mission. Great characters and authentic historical background make this a surprisingly winning novel.”
— Russ Lawrence, Chapter One Book Store, Hamilton, MT

“I have just met two of the most likable and remarkable characters, Lev and Kolya, young Russian men trying to survive the Siege of Leningrad who are given a chance to save themselves from death if they can find a dozen eggs for the wedding cake of the daughter of a powerful and ruthless Russian colonel. Thus begins an odyssey that is at times disturbing, but the beauty of this novel is in the writing. It contains humor along with sadness, and these two men forge a friendship that is priceless.”
— Carol Katsoulis, Anderson's Bookshop, Naperville, IL

“Set against the war-torn backdrop of Leningrad, two teenage boys end up, through stranger and stranger twists of fate, traveling cross-country to find a dozen eggs in exchange for their very lives. In the process, they learn more about human nature, both in themselves and others, than can possibly be explained. Wickedly funny and incredibly sad, it's far too short to be this lovely -- and yet it is.”
— Russ Marshalek, Wordsmiths Books, Decatur, GA

A writer visits his retired grandparents in Florida to document their experience during the infamous siege of Leningrad. His grandmother won't talk about it, but his grandfather reluctantly consents. The result is the captivating odyssey of two young men trying to survive against desperate odds.

Lev Beniov considers himself "built for deprivation." He's small, smart, and insecure, a Jewish virgin too young for the army, who spends his nights working as a volunteer firefighter with friends from his building. When a dead German paratrooper lands in his street, Lev is caught looting the body and dragged to jail, fearing for his life. He shares his cell with the charismatic and grandiose Kolya, a handsome young soldier arrested on desertion charges. Instead of the standard bullet in the back of the head, Lev and Kolya are given a shot at saving their own lives by complying with an outrageous directive: secure a dozen eggs for a powerful colonel to use in his daughter's wedding cake. In a city cut off from all supplies and suffering unbelievable deprivation, Lev and Kolya embark on a hunt to find the impossible. A search that takes them through the dire lawlessness of Leningrad and the devastated surrounding countryside creates an unlikely bond between this earnest, lust-filled teenager and an endearing lothario with the gifts of a conman. Set within the monumental events of history, City of Thieves is an intimate coming-of-age tale with an utterly contemporary feel for how boys become men.

David Benioff was born and raised in New York City. He adapted his first novel, "The 25th Hour," into the feature film directed by Spike Lee. With many other screenplays to his credit, he is also the writer of the films, "Brothers" and "X-Men Origins: Wolverine." Stories from his critically acclaimed collection "When the Nines Roll Over" appeared in "Best New American Voices" and "The Best Nonrequired American Reading." His latest novel is "City of Thieves." He lives in Los Angeles with his wife and daughter where he is a co-creator and writer for the HBO hit series "Game of Thrones."