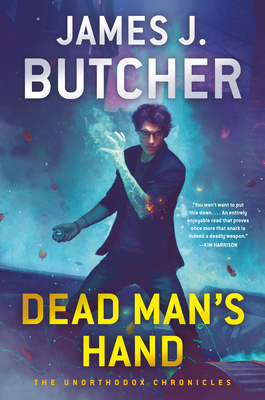 This is book number 1 in the The Unorthodox Chronicles series.

In the tradition of his renowned father, James J. Butcher’s debut novel is a brilliant urban fantasy about a young man who must throw out the magical rule book to solve the murder of his former mentor.

On the streets of Boston, the world is divided into the ordinary Usuals, and the paranormal Unorthodox. And in the Department of Unorthodox Affairs, the Auditors are the magical elite, government-sanctioned witches with spells at their command and all the power and prestige that comes with it. Grimshaw Griswald Grimsby is…not one of those witches.

After flunking out of the Auditor training program and being dismissed as “not Department material,” Grimsby tried to resign himself to life as a mediocre witch. But he can’t help hoping he’ll somehow, someway, get another chance to prove his skill. That opportunity comes with a price when his former mentor, aka the most dangerous witch alive, is murdered down the street from where he works, and Grimsby is the Auditors’ number one suspect.

Proving his innocence will require more than a little legwork, and after forming a strange alliance with the retired legend known as the Huntsman and a mysterious being from Elsewhere, Grimsby is abruptly thrown into a life of adventure, whether he wants it or not. Now all he has to do is find the real killer, avoid the Auditors on his trail, and most importantly, stay alive.

JAMES J. BUTCHER spends most of his time in places that don’t exist, some of which he even made himself. What little time he has left is usually spent writing or exercising. He is the son of #1 New York Times bestselling author Jim Butcher, who introduced him to books, movies, and games. James lives in Denver and is working on his next novel.

“Woot! Get set for a wild ride!  Debut author James J. Butcher hits one out of the ballpark.  Nonstop action in this character-driven urban fantasy that is both laugh-out-loud and terrifying--sometimes at the same time.”—Patricia Briggs, #1 New York Times bestselling author

“Clear your schedule. You won’t want to put this down. With awkward heroes, convincing villains, and reluctant deadly mentors, James J Butcher’s Dead Man’s Hand is a gem. Uneven alliances evolving into comrades-in-arms, personal growth, and, most important to me, inventive world building all make Dead Man’s Hand an entirely enjoyable read that proves once more that snark is indeed a deadly weapon. Read it. You will not be disappointed. I eagerly await the sequel.”—Kim Harrison, #1 New York Times bestselling author

“Dead Man's Hand is splendid, a spectacular debut novel and the best book I’ve read in years. James J. Butcher is an outstanding storyteller and I can’t wait to read what he comes up with next.”—Faith Hunter, New York Times bestselling author

"Hits all the right notes for an entertaining urban fantasy series. Readers will want to see what happens next."—Library Journal

"Butcher manages to create relatable, believable characters with real flaws, real needs and wants, fleshing them out with tongue-in-cheek humor. . . . A roller-coaster fun book that will have the reader waiting impatiently for the next Grimsby tale.”—New York Journal of Books