Say It Loud!: On Race, Law, History, and Culture (Hardcover) 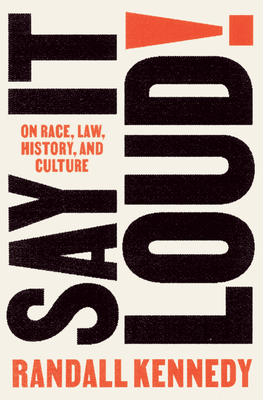 A NEW YORK TIMES NOTABLE BOOK OF THE YEAR • A collection of provocative essays exploring the key social justice issues of our time—from George Floyd to antiracism to inequality and the Supreme Court. Kennedy is "among the most incisive American commentators on race" (The New York Times).

In each essay, Kennedy is mindful of com­plexity, ambivalence, and paradox, and he is always stirring and enlightening. Say It Loud! is a wide-ranging summa of Randall Kennedy’s thought on the realities and imaginaries of race in America.

RANDALL KENNEDY is the author of six previous books. He is the Michael R. Klein Professor at Harvard Law School, where he teaches courses on contracts, criminal law, and the regulation of race relations. He is a memberof the bar of the District of Columbia, of the American Law Institute, and of the American Academy of Arts and Sciences. He lives in Massachusetts.

“In these trenchant essays, Kennedy updates previously published pieces that survey hot-button issues and enduring controversies involving race and the law . . .  [A] wide-ranging volume that stoutly defend[s] his centrist stance on race against excesses of the right and left . . . In a time of polarized racial politics, Kennedy’s closely reasoned and humanely argued takes offer an appealing alternative.”
—Publishers Weekly

“Kennedy observes that “social relations are complex and messy.” Having lived through several eras, Kennedy calls himself a “Black/Negro/Colored/African American” man born in the year of Brown v. Board of Education. Some of the pieces are of a historical survey nature, [others] the author’s denunciations of “antiracism gone awry” and small-step racial justice laws that “are attentive to the pluralism that infuses American practices.”
“Sometimes contrarian, sometimes controversial, Kennedy’s arguments merit consideration in a riven discourse.”
—Kirkus Reviews