You Are Your Best Thing: Vulnerability, Shame Resilience, and the Black Experience (Paperback) 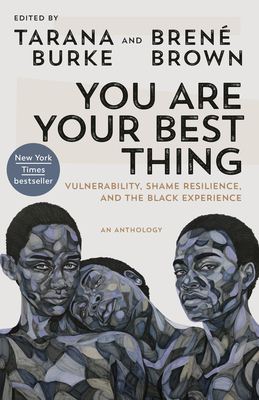 NEW YORK TIMES BESTSELLER • Tarana Burke and Dr. Brené Brown bring together a dynamic group of Black writers, organizers, artists, academics, and cultural figures to discuss the topics the two have dedicated their lives to understanding and teaching: vulnerability and shame resilience.

It started as a text between two friends.

Tarana Burke, founder of the ‘me too.’ Movement, texted researcher and writer Brené Brown to see if she was free to jump on a call. Brené assumed that Tarana wanted to talk about wallpaper. They had been trading home decorating inspiration boards in their last text conversation so Brené started scrolling to find her latest Pinterest pictures when the phone rang.

But it was immediately clear to Brené that the conversation wasn’t going to be about wallpaper. Tarana’s hello was serious and she hesitated for a bit before saying, “Brené, you know your work affected me so deeply, but as a Black woman, I’ve sometimes had to feel like I have to contort myself to fit into some of your words. The core of it rings so true for me, but the application has been harder.”

Brené replied, “I’m so glad we’re talking about this. It makes sense to me. Especially in terms of vulnerability. How do you take the armor off in a country where you’re not physically or emotionally safe?”

“That’s why I’m calling,” said Tarana. “What do you think about working together on a book about the Black experience with vulnerability and shame resilience?”

There was no hesitation.

Burke and Brown are the perfect pair to usher in this stark, potent collection of essays on Black shame and healing. Along with the anthology contributors, they create a space to recognize and process the trauma of white supremacy, a space to be vulnerable and affirm the fullness of Black love and Black life.

Tarana J. Burke has worked at the intersection of sexual violence and racial justice for more than twenty-five years. She has created and led various campaigns to interrupt sexual violence and other systemic inequalities disproportionately impacting marginalized people, particularly Black women and girls, including the ‘me too’ movement. Burke was part of the Silence Breakers, named Time magazine’s 2017 Person of the Year, and one of Time’s 100 Most Influential People in 2018. She has also received the 2019 Sydney Peace Prize, Harvard University’s Gleitsman Award, and the Ridenhour Courage Prize.

Brené Brown is a research professor at the University of Houston, where she holds the Huffington Foundation–Brené Brown Endowed Chair. She is also a visiting professor in management at the University of Texas at Austin McCombs School of Business. Brown has spent the past two decades studying courage, vulnerability, shame, and empathy and is the author of six #1 New York Times bestsellers. She hosts the Unlocking Us and Dare to Lead podcasts.