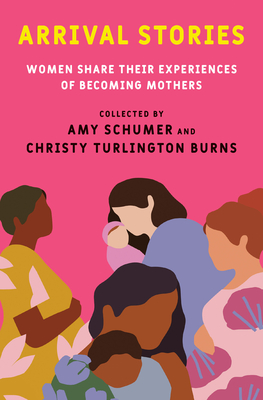 Throughout her difficult pregnancy and following her frightening labor experience, Amy Schumer found camaraderie and empowerment in hearing birth stories from other women, including those of her friend Christy Turlington Burns. Turlington Burns’s work in maternal health began after she experienced a childbirth-related complication in 2003—an experience that would later inspire her to direct and produce the documentary feature film No Woman, No Cry, about the challenges women face throughout pregnancy and childbirth around the world.

It is through Schumer and Turlington Burns’s conversations that the idea for Arrival Stories was born. By sharing their experiences, the contributors to Arrival Stories offer an informative and deeply affecting account of what it feels like when a woman first realizes she is a mother. This beautiful collection features essays by:

Intimate and urgent, Arrival Stories offers a panoramic view of motherhood and highlights the grave injustices that women of color face in maternal healthcare. It is the perfect book for any expectant or new mother, or for anyone who knows and loves one.

Amy Schumer is one of the most influential figures in the entertainment industry as a stand-up comedian, actress, writer, producer, and director. She is the recipient of a Peabody Award, a Critics’ Choice Television Award, and two Primetime Emmy Awards. She was raised in New York City and Long Island and is a mother.

Christy Turlington Burns is the founder and CEO of Every Mother Counts. Christy’s work in maternal health began after experiencing a childbirth related complication in 2003—an experience that would later inspire her to direct and produce the documentary feature film No Woman, No Cry, about the challenges women face throughout pregnancy and childbirth around the world. Under Christy’s leadership, Every Mother Counts has invested over $20 million in programs in Africa, Latin America, South Asia, and the United States focused on making pregnancy and childbirth safe, respectful, and equitable for every mother, everywhere.

“Intimate . . . The stories are consequential, the voices delightfully direct, and the collection’s greatest strength is in its embrace of all the mothers, whether they are single, coupled, straight, queer, or chose adoption. This anthology triumphs by making motherhood feel anything but lonely.”—Publishers Weekly (starred review)