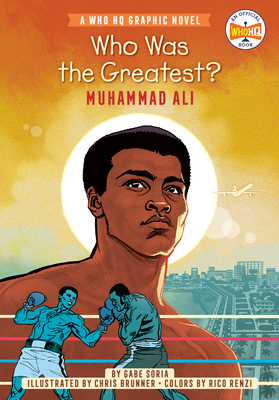 "The Who HQ Graphic Novels series does an excellent job of quickly engaging readers by capturing the drama and immediacy of pivotal historic events." — Booklist

Discover the story behind Muhammad Ali and the boxing match that captivated the world, the Thrilla In Manila, in this powerful graphic novel -- written by Murder Ballads' Gabe Soria and illustrated by award-winning artists Chris Brunner and Rico Renzi.

Presenting Who HQ Graphic Novels: an exciting new addition to the #1 New York Times Best-Selling Who Was? series!

Explore the journey Muhmmad Ali took to win his final match against fellow heavyweight boxing champion Joe Frazier, known as the Thrilla in Manila. A story of athleticism, heart, and determination, this graphic novel invites readers to immerse themselves into the explosive power of the boxing champion and civil rights activist-- brought to life by gripping narrative and vivid full-color illustrations that jump off the page.

Known for the popular online role-playing game Sword & Backpack, Gabe Soria is best known in the kidlit community for reinventing the choice-driven book genre with his four-book series, Midnight Arcade. He has also written several comic books for DC Comics, including Batman '66. Gabe also collaborated with friend Dan Auerbach of the Black Keys on the Murder Ballads comic book.

Chris Brunner is a cartoonist based in Atlanta, Georgia. His clients have included Nike, Lucasfilm, Disney, Nickelodeon, the NBA, DC Comics, and Marvel Entertainment, but he is most proud of his work on Image Comics' Loose Ends. In 2016 he received his M.F.A. from SCAD-Atlanta, and is currently a professor in their Sequential Art department. His work contributed to the Eisner-winning runs of Southern Bastards and Bitter Root, each awarded Best Ongoing Series in 2016 and 2020.

Rico Renzi is an artist and designer from Washington D.C. His work has appeared in WIRED and Fast Company, and various publications from DC Comics, Marvel, Image Comics, Dark Horse Comics, Scholastic, BOOM! Studios, Oni Press and IDW. In 2018, his work was featured in Spider-Man: Into the Spider-Verse, which won the Oscar for Best Animated Feature Film at the 2019 Academy Awards.

"The Who HQ Graphic Novels series does an excellent job of quickly engaging readers by capturing the drama and immediacy of pivotal historic events… In 'Who Was the Greatest?,' the third world-championship boxing match between Muhammad Ali and Smokin' Joe Frazier comes vividly to life as round after brutal round-and the athletes fighting them-is detailed…These graphic offerings manage to pack in an impressive amount of information and are sure to appeal to middle-grade readers." — Booklist