Cities of Smoke and Starlight (Paperback) 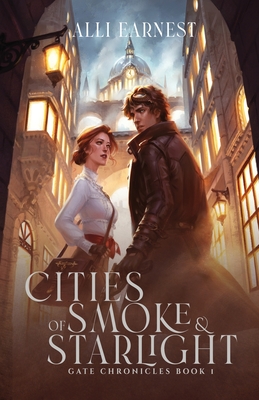 Two tortured souls. One world on the brink of war.

Kase Shackley is an embittered hover pilot still reeling from the night his sister died in his arms. He's a screw up in every sense, so when a pilot nearly dies on his watch, he faces serious charges. Seeking to clear his name, he flies a ragtag crew to a lost and dangerous land from which they might never return. If only he didn't have to work with the infuriating bookshop girl who insulted him with Shakespeare...

Hallie Walker, top scholar at the University, is jaded by the glittering society she'd always dreamed of joining. Raised in the mountains, she fled to the city to forget her painful past. When she loses her bookshop job and the promise of school tuition, she agrees to a top-secret government mission if only for the promised substantial sum upon her return. Now if she could just ignore the ungrateful, arrogant prat of a pilot...

In a world of hoverships and crumbling First Earth artifacts, it's up to Hallie and Kase to accomplish the impossible: secure an alliance with an elusive, mystical race to help defend against a kingdom with dangerous technology and ancient magic. If they fail, the war will be lost before it even begins.

Cities of Smoke & Starlight is a heart-wrenching, character-driven steampunk novel featuring a clean, slowburn enemies-to-lovers romance, perfect for fans of Dune, Pride & Prejudice, and anyone who believed Rogue One needed a romantic subplot.