Thriving While Black: The Act of Surviving and Thriving in the same space (Paperback) 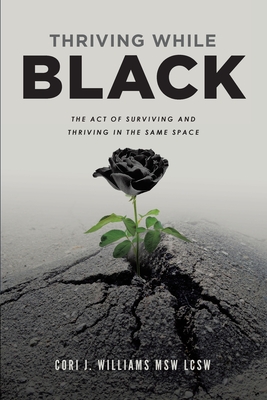 By Cori Jamal Williams
$23.00
Ships from our supplier - you choose to your home or to the store

"Thriving While Black" sets out to explore the psychological and emotional consequences of being Black in corporate America. "Ain't I an American?" the famous words of Langston Hughes, is a question every Black person unwittingly asks themselves. The playing field for Whites and Blacks is not equal, whether in education, science and technology, life expectancy, earning, or social strata. Blacks have been discriminated against and excluded based on their skin color, which creates the question of what their place is in America.There exist persistent Black inequalities in the structural make up of America; inequalities not inherent due to the differences in the abilities of Whites and Blacks but instead, due to the differences in access to opportunities between the two groups.Black workers in corporate America have to grapple with racial microaggressions in the workplace, which often involves White workers assuming that their Black counterparts are intellectually inferior to them. Thus, Blacks are passed over when important decisions are being made because of the belief that they have nothing intellectual to bring to the table; a phenomenon that is an obstacle to the upward mobility of Blacks in different organizations."Thriving While Black" portrays that Blacks are Americans too and should not have to be seen as less and unequal Their humanity should not be reduced to mere negative stereotypes. If America truly prides itself in diversity, there shouldn't be a forced need for Blacks to adopt mainstream White culture, hair styling, speech mannerisms, dress codes, etc., and neglect their own African-American identity just to fit into corporate America. The beauty of diversity is not gathering different and diverse people and trying to make them act the same way. Instead, it is bringing diverse people together and allowing their diversity to thrive. This is the focus of this book.