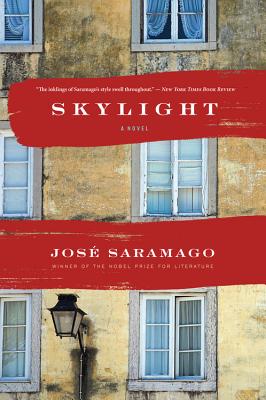 “Unmistakably Saramago . . . There is no shortage of wonders to be found in [Skylight].” — Washington Post

“A fascinating and startlingly mature work . . . The book is a gem.” — Boston Globe

Lisbon, late 1940s. The inhabitants of a faded apartment building are struggling to make ends meet: Silvio the cobbler and his wife take in a disaffected young lodger; Dona Lídia, a retired prostitute, is kept by a businessman with a roving eye. Humble salesman Emilio’s Spanish wife is in a permanent rage; beautiful Claudinha’s boss lusts for her; Justina and her womanizer husband live at war with each other. Happy marriages, abusive relationships, jealousy, gossip, love—Skylight is a portrait of ordinary people painted by the master of the quotidian, a great observer of the immense beauty and profound hardship of the modern world.

“The gifted young Saramago makes these characters click together in a way that's extremely sympathetic.” — NPR, All Things Considered

“It was only a matter of time before a work of such extraordinary honesty and perception would make its way into the world.” — San Francisco Chronicle

JOSÉ SARAMAGO (1922–2010) was the author of many novels, among them Blindness, All the Names, Baltasar and Blimunda, and The Year of the Death of Ricardo Reis. In 1998 he was awarded the Nobel Prize for Literature.

MARGARET JULL COSTA has established herself as the premier translator of Portuguese literature into English today.

"Fluid and imaginative...[Skylight] is a masterly creation: pessimistic without being bleak, lyrical without being sentimental...Brilliantly structured, the novel contains moments of extraordinary poignancy...[Saramago] shows humanity at its most anxious, its most vulnerable and most true." —The Independent (UK)   "Not only does [Skylight] illuminate the slow development of a radically original artist, but it is an interesting novel in its own right...The explicit sexuality of the book (which may have kept it from being considered for publication in Salazar's Portugal in 1953) is remarkable now only because it is so compassionate...Moving from character to character, the loosely plotted story includes a good deal of mean-spirited evildoing, quite in the tradition of Balzac and the naturalists. It also includes dry humour, and at least one tranquil domestic scene revealed suddenly as almost visionary." —The Guardian (UK)   "Compelling...[Skylight] is shot through with more than enough flashes of brilliance to justify it seeing the light of day." —The National (UAE)     —