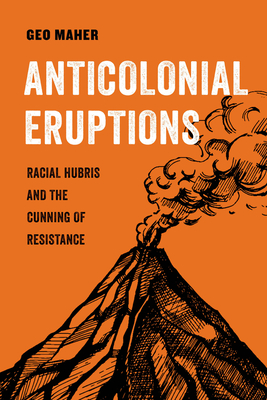 This incisive study reveals the fundamental, paradoxical weakness of colonialism and the enduring power of anticolonial resistance.

Resistance is everywhere, but everywhere a surprise, especially when the agents of struggle are the colonized, the enslaved, the wretched of the earth. Anticolonial revolts and slave rebellions have often been described by those in power as “eruptions”—volcanic shocks to a system that does not, cannot, see them coming. In Anticolonial Eruptions, Geo Maher diagnoses a paradoxical weakness built right into the foundations of white supremacist power, a colonial blind spot that grows as domination seems more complete.
Anticolonial Eruptions argues that the colonizer’s weakness is rooted in dehumanization. When the oppressed and excluded rise up in explosive rebellion, with the very human demands for life and liberation, the powerful are ill-prepared. This colonial blind spot is, ironically, self-imposed: the more oppressive and expansive the colonial power, the lesser-than-human the colonized are believed to be, the greater the opportunity for resistance. Maher calls this paradox the cunning of decolonization, an unwitting reversal of the balance of power between the oppressor and the oppressed. Where colonial power asserts itself as unshakable, total, and perpetual, a blind spot provides strategic cover for revolutionary possibility; where race or gender make the colonized invisible, they organize, unseen. Anticolonial Eruptions shows that this fundamental weakness of colonialism is not a bug, but a permanent feature of the system, providing grounds for optimism in a contemporary moment roiled by global struggles for liberation.

Geo Maher is Visiting Associate Professor of Global Political Thought at Vassar College, author of Decolonizing Dialectics and A World without Police, and coeditor of the Duke University Press series Radical Américas.