Shame: How America's Past Sins Have Polarized Our Country (Hardcover) 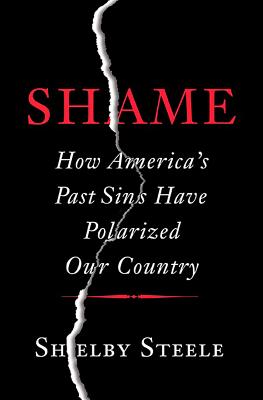 The United States today is hopelessly polarized; the political Right and Left have hardened into rigid and deeply antagonistic camps, preventing any sort of progress. Amid the bickering and inertia, the promise of the 1960s -- when we came together as a nation to fight for equality and universal justice -- remains unfulfilled.

As Shelby Steele reveals in Shame, the roots of this impasse can be traced back to that decade of protest, when in the act of uncovering and dismantling our national hypocrisies -- racism, sexism, militarism -- liberals internalized the idea that there was something inauthentic, if not evil, in the America character. Since then, liberalism has been wholly concerned with redeeming modern American from the sins of the past, and has derived its political legitimacy from the premise of a morally bankrupt America. The result has been a half-century of well-intentioned but ineffective social programs, such as Affirmative Action. Steele reveals that not only have these programs failed, but they have in almost every case actively harmed America's minorities and poor. Ultimately, Steele argues, post-60s liberalism has utterly failed to achieve its stated aim: true equality. Liberals, intending to atone for our past sins, have ironically perpetuated the exploitation of this country's least fortunate citizens.

It therefore falls to the Right to defend the American dream. Only by reviving our founding principles of individual freedom and merit-based competition can the fraught legacy of American history be redeemed, and only through freedom can we ever hope to reach equality.

Approaching political polarization from a wholly new perspective, Steele offers a rigorous critique of the failures of liberalism and a cogent argument for the relevance and power of conservatism.

Shelby Steele is the Robert J. and Marion E. Oster Senior Fellow at the Hoover Institution. Winner of the Bradley Prize and a National Humanities Medal and the author of the National Book Critics Circle award-winning The Content of Our Character, Steele lives in the Central Coast of California.

Wall Street Journal
“Shelby Steele is one of the very few writers able to tell home truths about the plight of black Americans.... In Shame, an essay on the political polarization of our country and on the want of progress among black Americans, he has produced his most complex and challenging work.... The irony here is that Shelby Steele might just be a Tom of a different kind—a black Tom Paine, whose 21st-century common sense could go a long way to bringing his people out of their by now historical doldrums.”

Publishers Weekly, starred review
“This timely critique warrants attention from anyone troubled by the persistence of racial discord in American life, from Selma to Ferguson.”

Kirkus
“A conservative analysis of political polarization and race relations in America, more thoughtful and less vitriolic than most volleys from either side.”

Claremont Review of Books
“Steele may well have given us his most important book yet.”