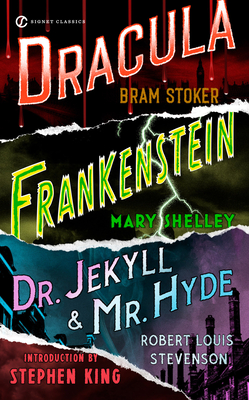 Three horror icons come together in one indispensable tome—with an introduction by Stephen King.

“Within the pages of this volume you will come upon three of the darkest creations of English nineteenth-century literature; three of the darkest in all of English and American literature, many would say…and not without justification…These three creatures, presented together for the first time, all have a great deal in common beyond their power to go on frightening generation after generation of readers…but that fact alone should be considered before all others.”—From the Introduction by Stephen King

A diabolical, bloodthirsty Count draws an unsuspecting young man into a world of terrors. A scientist oversteps the bounds of conscience and brings to life a tortured creation. A man of medicine explores his darker side only to fall prey to it. These three legendary tales have held readers spellbound for more than a century.

The titles alone—Dracula, Frankenstein, and Dr. Jekyll and Mr. Hyde—have become synonymous with horror. They are part of a universal language that serves to put a monster’s face on the good-and-evil duality of our very human nature. Inventive and subversive, these classic tales of terror can shake even the modern reader with something far more profound than fear....

Born in London, Mary Wollstonecraft Shelley (1797-51) was the daughter of William Godwin, a noted social theorist, and Mary Wollstonecraft, one of the leading literary women of the day. Her mother died soon after her birth, and Mary was raised first under the care of servants, then by a stepmother, and finally in the rarefied intellectual atmosphere of her father’s circle. In May 1814, she met Percy Bysshe Shelley and, in July of the year, moved with him to the Continent. Two years later, after the death of Shelley’s wife, the poet and Mary were able to wed. It was in Switzerland in 1816, as a result of a story-writing competition among the Shelleys and Lord Byron, that Mary began Frankenstein, her first and most famous novel. Published in 1818, it was followed by such works as Valperga (1823), The Last Man (1826), and Falkner (1837). In 1822, after the death of her husband, she devoted herself to the upbringing of her son and the securing of his right to the Shelley family title.

Bram Stoker (1847-1912) was born in Dublin. After attending Dublin University, he spent ten years as an Irish civil servant, trying to keep up his writing in his free time. By 1871, he had become the drama critic for the Dublin Mail and had gained experience as a newspaper editor, reporter, and short story writer. In 1878 he became the personal assistant to Sir Henry Irving, the foremost Shakespearean actor of his day, accompanying him on tours and managing Irving’s theater. After Irving’s death in 1905, Stoker worked on the literary staff of the London Telegraph. Dracula, his most famous work, was published in 1897.

Throughout his life, Robert Louis Stevenson (1850-1894) was plagued by ill health, which interrupted his formal education at Edinburgh University. Pursuing the life of a bohemian during his twenties and thirties, he traveled around Europe and formed the basis of his first two books, An Inland Journey (1878) and Travels with a Donkey (1879). Stevenson gained his first popular success with Treasure Island (1883). The Strange Case of Dr. Jekyll and Mr. Hyde, which sold forty thousand copies in six months, and Kidnapped appeared in 1886, followed by The Black Arrow (1888) and The Master of Ballantrae (1889). In 1888, he set out with his family for the South Seas, traveling to the leper colony at Molokai, and finally settling in Samoa, where he died.

Stephen King is the author of more than fifty books, all of them worldwide bestsellers. He is the recipient of the 2014 National Medal of Arts and the 2003 National Book Foundation Medal for Distinguished Contribution to American Letters. He lives in Bangor, Maine, with his wife, novelist Tabitha King.