The Autobiography and Other Writings (Mass Market) 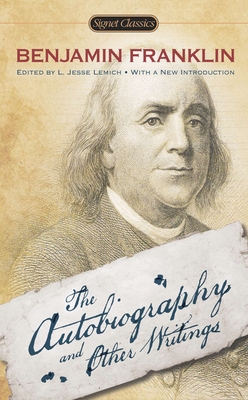 A comprehensive and insightful compilation of Benjamin Franklin’s The Autobiography and other essays which offers an in-depth look into the life of America’s most fascinating Founding Father.

Benjamin Franklin was a true Renaissance man: writer, publisher, scientist, inventor, diplomat, and politician. During his long life, he offered advice on attaining wealth, organized public institutions, contributed to the birth of a nation, and negotiated with foreign powers to ensure his country’s survival.

Through the words of the elder statesman himself, The Autobiography and Other Writings presents a remarkable insight into the man and his accomplishments. Additional writings from Benjamin Franklin’s wife and son provide a more intimate portrait of the husband and father who became a legend in his own time.

Edited by L. Jesse Lemich
With an Introduction by Walter Isaacson
and an Afterword by Carla Mulford

Benjamin Franklin (1706–90) was born in Boston. When he was twelve, his father apprenticed him to his half brother James as a printer. James was later the publisher of the New England Courant, where Franklin’s first articles, “The Dogood Papers,” were published before he was seventeen. He went to Philadelphia in 1723, where he was befriended by William Keith, Governor of Pennsylvania, who offered to help Franklin get started in business. They went to England, where he hoped to purchase printing equipment, but he was soon deserted by Keith and again turned to printing for a livelihood. His privately printed “A Dissertation on Liberty and Necessity, Pleasure and Pain” (1725) introduced him to leading Deists and other intellectuals in London. A year later, he returned to Philadelphia, and by 1730, he had been appointed public printer for Pennsylvania. In 1731, he established the first circulation library in the United States and, in 1743–44, the American Philosophical Society. As a publisher, his greatest success was Poor Richard’s Almanack, which went through numerous editions and was translated into many languages. Over the next thirty-five years, he devoted himself largely to politics and diplomacy, by serving in the Continental Congress, signing the Declaration of Independence, and becoming Minister to France. On his return in 1785, he was elected President of the Commonwealth of Pennsylvania. Still concerned with the rights of the individual, he published papers encouraging the abolition of slavery. He died in Philadelphia.

L. Jesse Lemisch is Professor Emeritus of History at the John Jay College of Criminal Justice of the City University of New York. Among his notable works is The American Revolution Seen from the Bottom Up.

Walter Isaacson, the CEO of the Aspen Institute, has been chairman of CNN and the managing editor of Time. He is the author of Steve Jobs; Einstein: His Life and Universe; Benjamin Franklin: An American Life; and Kissinger: A Biography, and is the coauthor of The Wise Men: Six Friends and the World They Made. He lives in Washington, DC.

Carla Mulford has been teaching early American literature and culture and Native American studies at Pennsylvania State University, University Park, since 1986. The Founding President of the Society of Early Americanists, she has published books related to Franklin’s associates and contemporaries John Leacock, Annis Stockon, William Hill Brown, and Hannah Webster Foster. She has also compiled (with Amy E. Winans and Angela Vietto) two collections: a biographical dictionary, American Women Prose Writers to 1820, and an anthology of readings, Early American Writings. She has published several essays on Benjamin Franklin and is working on two book-length studies of Franklin called Benjamin Franklin and the Arts of Science and Benjamin Franklin and the Ends of Empire.