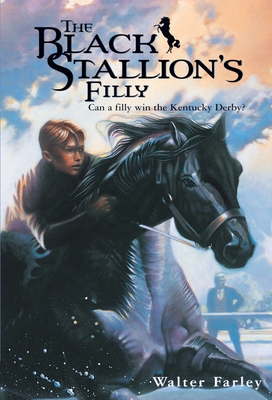 This is book number 8 in the Black Stallion series.

"She’ll never be a racehorse,” murmurs the crowd as Black Minx is led into the sales ring. But Alec Ramsay thinks differently and buys the Black’s first filly to train her for the Kentucky Derby. But Black Minx, like her sire, has a mind of her own. This fast-paced racing story follows a great horse’s journey through training and preliminary races to the opening gate at America’s most famous racetrack: Churchill Downs.

John Rowe's paintings have appeared on movie posters, books, billboards, magazines, and advertisements throughout the country and around the world. His Horse series inspired the publishers of Walter Farley's The Black Stallion to reissue this classic series, commissioning 24 new paintings by Rowe for the covers. His other clients include Amblin Entertainment, Kraft Foods, United Airlines, Universal Studios, Nestle, Disney, and many others.John has maintained a successful painting career for nearly 20 years. His studio is in La Canada, California, where he lives with his wife and two children. He received his art training at Art Center College of Design, and has worked with clients throughout the United States and around the world.