Notes from The Century Before: A Journal from British Columbia (Modern Library Exploration) (Paperback) 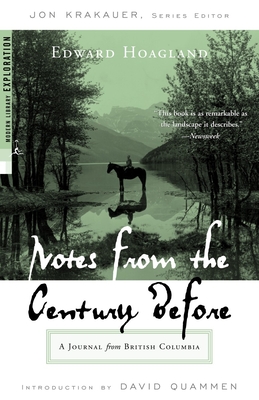 In 1966, Edward Hoagland made a three-month excursion into the wild country of British Columbia and encountered a way of life that was disappearing even as he chronicled it. Showcasing Hoagland’s extraordinary gifts for portraiture—his cast runs from salty prospector to trader, explorer, missionary, and indigenous guide—Notes from the Century Before is a breathtaking mix of anecdote, derring-do, and unparalleled elegy from one of the finest writers of our time.

Jon Krakauer is the author of Into Thin Air, which was a finalist for the Pulitzer Prize, and Into the Wild. His work has appeared in many magazines, including Outside, Smithsonian, and National Geographic. He chose the books in this series for their literary merit and historical significance—and because he found them such a pleasure to read.

“This book is as remarkable as the landscape it describes.” —Newsweek

“One of the most interesting, revealing, and delightful travel books I have read.”—The New York Review of Books

“His journal is about tangles and unrealized ambitions . . . and he understands wonderfully what to make of what he sees and hears. . . . A strange and beautiful book.”—The Washington Post

“Hoagland builds up an extensive, vivid picture of a place and people and, like all good travel writers, makes the reader want to start right out over his tracks.”—The Atlantic Monthly

“A beautiful book: so sharp and persistent in rendering the visible world, and yet so strangely wild with feeling.”—Philip Roth