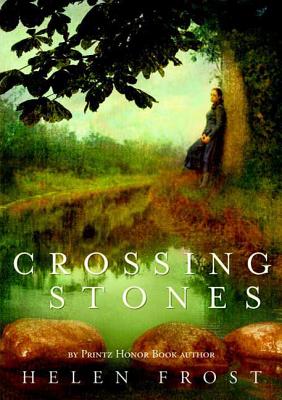 “Helen Frost has once again told a compelling story in poetic form. Two families separated by a creek suffer the pain of sons fighting in World War I. The poems are designed to look like stepping stones and the flow of water, but every poem also stands on its own as a literary piece.”
— Shirley Mullin, Kids Ink, Indianapolis, IN

Maybe you won't rock a cradle, Muriel.
Some women seem to prefer to rock the boat.

Eighteen-year-old Muriel Jorgensen lives on one side of Crabapple Creek. Her family's closest friends, the Normans, live on the other. For as long as Muriel can remember, the families' lives have been intertwined, connected by the crossing stones that span the water. But now that Frank Norman—who Muriel is just beginning to think might be more than a friend—has enlisted to fight in World War I and her brother, Ollie, has lied about his age to join him, the future is uncertain. As Muriel tends to things at home with the help of Frank's sister, Emma, she becomes more and more fascinated by the women's suffrage movement, but she is surrounded by people who advise her to keep her opinions to herself. How can she find a way to care for those she loves while still remaining true to who she is?

Written in beautifully structured verse, Crossing Stones captures nine months in the lives of two resilient families struggling to stay together and cross carefully, stone by stone, into a changing world.

Helen Frost is the author of several books for young people, including Hidden, Diamond Willow, Crossing Stones, The Braid, and Keesha’s House, selected an Honor Book for the Michael L. Printz Award. Helen Frost was born in 1949 in South Dakota, the fifth of ten children. She recalls the summer her family moved from South Dakota to Oregon, traveling in a big trailer and camping in places like the Badlands and Yellowstone. Her father told the family stories before they went to sleep, and Helen would dream about their travels, her family, and their old house. “That’s how I became a writer,” she says. “I didn’t know it at the time, but all those things were accumulating somewhere inside me.” As a child, she loved to travel, think, swim, sing, learn, canoe, write, argue, sew, play the piano, play softball, play with dolls, daydream, read, go fishing, and climb trees. Now, when she sits down to write, her own experiences become the details of her stories. Helen has lived in South Dakota, Oregon, Massachusetts, New York, Vermont, Scotland, Colorado, Alaska, California, and Indiana. She currently lives in Fort Wayne, Indiana, with her family.

“The distinct voices of the characters lend immediacy and crispness to a story of young people forced to grow up too fast.” —Starred, Horn Book

“Frost skillfully pulls her characters back from stereotype with their poignant, private, individual voices and nuanced questions, which will hit home with contemporary teens, about how to recover from loss and build a joyful, rewarding future in an unsettled world.” —Starred, Booklist

“With care and precision, Frost deftly turns plainspoken conversations and the internal monologues of her characters into stunning poems that combine to present three unique and thoughtful perspectives on war, family, love and loss. Heartbreaking yet ultimately hopeful, this is one to savor.” —Starred, Kirkus Reviews

“Frost's warmly sentimental novel covers a lot of political, social, and geographical ground . . . . But this is Muriel's story, and her determined personality and independence will resonate with readers.” —School Library Journal

“A thoughtful read.” —Bulletin of the Center for Children's Books

“Both a great story and a perfectly-worded poetic work of art.” —Richie's Picks

“This beautifully written, gently told story can be used for classroom discussion in social studies and English, or simply for leisure reading.” —VOYA