Floating In A Most Peculiar Way: A Memoir (Paperback) 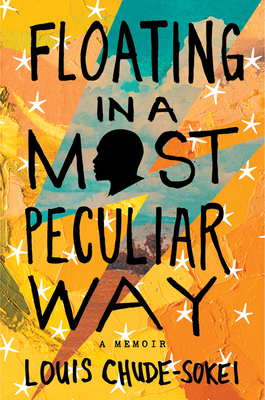 The astonishing journey of a bright, utterly displaced boy, from the short-lived African nation of Biafra, to Jamaica, to the harshest streets of Los Angeles—a searing memoir that adds fascinating depth to the coming-to-America story

The first time Chude-Sokei realizes that he is “first son of the first son” of a renowned leader of the bygone African nation is in Uncle Daddy and Big Auntie’s strict religious household in Jamaica, where he lives with other abandoned children. A visiting African has just fallen to his knees to shake him by the shoulders: “Is this the boy? Is this him?”

Chude-Sokei’s immersion in the politics of race and belonging across the landscape of the African diaspora takes a turn when his traumatized mother, who has her own extraordinary history as the onetime “Jackie O of Biafra,” finally sends for him to come live with her. In Inglewood, Los Angeles, on the eve of gangsta rap and the LA riots, it’s as if he’s fallen to earth. In this world, anything alien—definitely Chude-Sokei’s secret obsession with science fiction and David Bowie—is a danger, and his yearning to become a Black American gets deeply, sometimes absurdly, complicated. Ultimately, it is a boisterous pan-African family of honorary aunts, uncles, and cousins that becomes his secret society, teaching him the redemptive skill of navigating not just Blackness, but Blacknesses, in his America.

LOUIS CHUDE-SOKEIis a writer, scholar, and director of the African American studies program at Boston University. His writing on the African diaspora and other topics has appeared in national and international venues. He lives in Boston.

A New York Times Editor’s Choice   “Herein lies the beauty of ‘Floating in a Most Peculiar Way’: It reveals how we carry trauma with us, how that trauma can cause us to hurt one another, and how we still love and carry one another with wounds unhealed…These are words in which those of us who have floated outside for so long can touch down for a bit, and connect.” —Ijeoma Oluo, New York Times Book Review   "A beautifully told story about displacement and coming-of-age."—People Magazine   "Chude-Sokei chronicles his...missteps, advances and inner conflicts to create a moving, perspicacious account of disguising his origins, of adopting pose after pose, of seeking acceptance. It is a story of perplexed identity, of its permutations and specificities."—Minneapolis Star-Tribune   "Storytelling, Chude-Sokei realized early, is 'an act of survival.' Here, he writes himself into existence--his abandonment; his less-than othering; his search for manhood among interchangeable aunties; answers to his past; his return to his birthplace. Ending where he began, he comes full circle toward luminous acceptance. Readers are guaranteed an extraordinary journey…an exquisite memoir.”—Shelf Awareness   “From the start it is clear Floating in a Most Peculiar Way is going to be a journey of discovery like few others…This is narrative storytelling at its best.”—New York Journal of Books   "Stupendous doesn't even begin to describe the extraordinary power and exhilarating beauty of Floating in a Most Peculiar Way. Here is a memoir that blazes like a star and rhymes like Paul Beatty at his best. Louis Chude-Sokei is a writer with all the gifts and then some."—Junot Diaz, author of the Pulitzer Prize-winning The Brief Wondrous Life of Oscar Wao and of This Is How You Lose Her     "Chude-Sokei's Floating in a Most Peculiar Way is a rich, immersive coming-of-age tale from a man of eccentric, transnational upbringing. Chude-Sokei's honest and eloquent writing ultimately transforms his memoir into a superlative and unforgettable book.”—Chigozie Obioma, author of The Fishermen and An Orchestra of Minorities (both finalist for the Booker prize)    “This is autobiography at its best. In stories of the multiple blended accents, atrocities, musics, prejudices and foods of London, Biafra, Jamaica, D.C., South Central L.A. and elsewhere, Chude-Sokei confronts the nightmare of history--along with the persistent, sometimes joyful adventure of awakening from it.”—Robert Pinsky, Poet Laureate of the United States, 1997-2000     “Floating in a Most Peculiar Way delivers a riveting immigrant’s journey spanning the African Diaspora that is certain to refine our sense of what it means to be American, and to complicate, especially, what it means to be a Black American.”—Charles Johnson, author of the National Book Award-winning Middle Passage and of The Way of the Writer: Reflections on the Art and Craft of Storytelling   “An affecting memoir of life as an exile, with a David Bowie soundtrack in the background . . . deftly profound.”—Kirkus Reviews, starred review   “Absorbing...highly recommended for all memoir readers.”—Booklist    “A beautiful, pl —