The Perfect Other: A Memoir of My Sister (Hardcover) 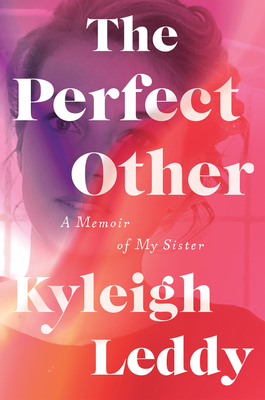 “Shines a light on the stigma surrounding mental health and schizophrenia. This deeply personal memoir will give readers greater empathy and understanding in supporting those who are oftentimes misunderstood.” —Sheryl Sandberg

As a child, all Kait Leddy had ever wanted was a little sister. When Kyleigh was born, she and Kait were inseparable; Kait would protect her, include her, cuddle, and comfort her. To Kyleigh, her big sister was her whole world.

But as Kait entered adolescence, her personality changed. She began lashing out emotionally and physically and sometimes lost touch with reality, behavior that worsened after a traumatic head injury. The family struggled to keep this terrifying, often violent, side of Kait private—at school and in her social life, she was still the gorgeous, effervescent life of the party. Powerless to help, Kyleigh watched in horror as her perfect sibling’s world began to collapse and Kait was diagnosed with schizophrenia.

Then, in January 2014, twenty-two-year-old Kait disappeared. Though her body was never found, security footage showed her walking to the peak of Philadelphia’s Benjamin Franklin Bridge, where it is presumed that she jumped. In this extraordinary memoir— a story of hope, grief, mental illness, and enduring love—a grieving Kyleigh reflects on her sister and their life together, honoring their bond and searching for answers and a way to find meaning in this devastating loss.

Kyleigh Leddy received her bachelor’s degree from Boston College and her MSW from Columbia University in advanced clinical practice and public policy. In 2019, she won the New York Times “Modern Love” college essay contest for a piece she wrote about grieving her sister, Kait. Her work has appeared in various publications, including the New York Times, Parents, and The Cut. She is based in New York City, and The Perfect Other is her first book.

“Leddy seeks courageously to “break the stigma” and silence that still surround schizophrenia and similar disorders while paying tribute to the woman whose life so profoundly transformed her own. A moving and deeply felt memoir about family and mental illness." — Kirkus Reviews

“Heartrending… Leddy offers a humanist portrait of the nuances of loving someone with mental illness… Gutting in its intensity… but well worth the effort.”  — Publishers Weekly

"The Perfect Other" by Kyleigh Leddy is an emotional memoir about the bond between sisters, and breaking the stigma surrounding discussions of mental health." — Popsugar